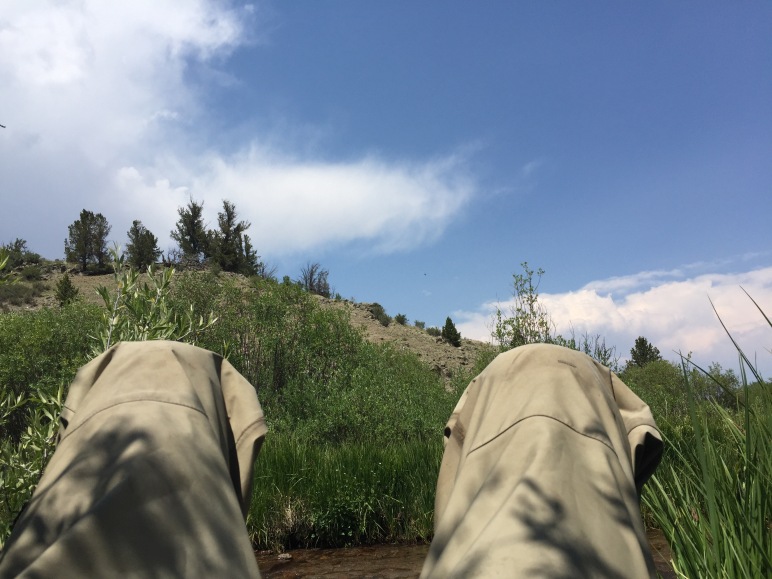 There is certainly something in angling that tends to

produce a gentleness of spirit and a pure serenity of mind. 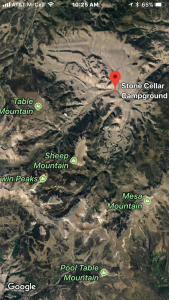 I’m spending a week in my mobile fish camp at Dome Lake in the high country between Gunnison and Saguache, Colorado.  I have strategically arrived after the hubbub of the July 4th weekend when yahoos of all sorts manage to congregate and shoot off fireworks, even at 9,000 feet.  Now it is quiet as I rouse early and hit the road at 7:30 a.m.  My destination is Saguache Park–a big broad valley framed by the spectacular La Garita Mountains about 30 miles to the south over the Continental Divide.  It’s in the lower 50s as I set out, but the sky is clear, and the sun is already warming things up–supposed to reach 75 today!

My route,  CR 17FF,  is a bumpy but decent gravel road that can be navigated by most vehicles, although on the other side of the pass I’ll shift into four-wheel drive to ford Saguache Creek in a couple of places to get to the headwaters.  The omens are all good–especially the lone antelope that scampers across the prairie as I creep by.

In 30 minutes I crest the pass over the Continental Divide and take in the stunning scene, then descend towards the creek. That first view of the water as it plunges into a long canyon gets my angling juices really flowing.   There’s good fishing down there, but I am headed the other way up into the headwaters of the creek that springs out of the La Garita Wilderness peaks. This whole area is infused with Ute Indian lore.  Saguache, the name of the creek, is a shortened form of “Saguaguachipa,” which is a Ute word said to mean “water of the blue earth.”  The Ute encampments near the present-day town of Saguache to the southeast were near springs where blue earth was found.  To me, it could also refer to the color of the water itself, which is a slightly off-color, milky blue at times, especially down lower.  Saguache Park is home to large herds of elk and mule deer, which I have crossed paths with during previous sojourns.  The valley is a broad grassland flanked on the southern slopes by ancient forests of towering spruce and fir.

I turn west past the primitive U.S. Forest Service Stone Cellar Campground that has a pump for water, an outhouse, but not much else, then the first ford.  Easy for my high-slung SUV, but not recommended in the average passenger vehicle.

Next is the  Stone Cellar Guard Station, a popular rustic cabin that can be rented from the USFS, and then past a working cow camp that is active in the summer.  The twisty, fishy-looking bends of the Middle Fork that parallels the road beckon, but I stay the course.  Wilder water lies ahead.

In about two miles I come to the second ford, much wider and deeper.  I say a little silent prayer and lurch forward into the water.  The stream bottom is solid, covered with gravel, and I make it through without any problem.  If the flows were any higher as they could be earlier in the summer or after a deluge, I might be forced to turn around.

A few miles ahead, the road diverges south and up from the creek which heads into a canyon past Table Mountain towards the massive San Luis Peak, a fourteener.  Using Google Maps, I detect what looks to be a spot where I can bushwhack into the canyon.  That’s the key here–to get away from the road and find a stretch that takes some effort to get to.  I park under a copse of aspens, gear up in my waders and start off across a broad grassy meadow towards the creek about 1/2 mike away.  When I reach the canyon rim, I let out a little “wwwoooo.”  What appeared on the satellite map view to be a nice easy incline is instead a steep, snag-filled slope.   But what I see in the canyon bottom is too hard to resist–a serpentine stream with enthralling pools at every bend.  Fortunately, I brought along my hiking pole that helps me navigate the slope, which I do so very gingerly.  I vow to buy one of those new Garmin satellite phones that send out an emergency signal at the push of the button.  A fall here and it might be days before you were found. 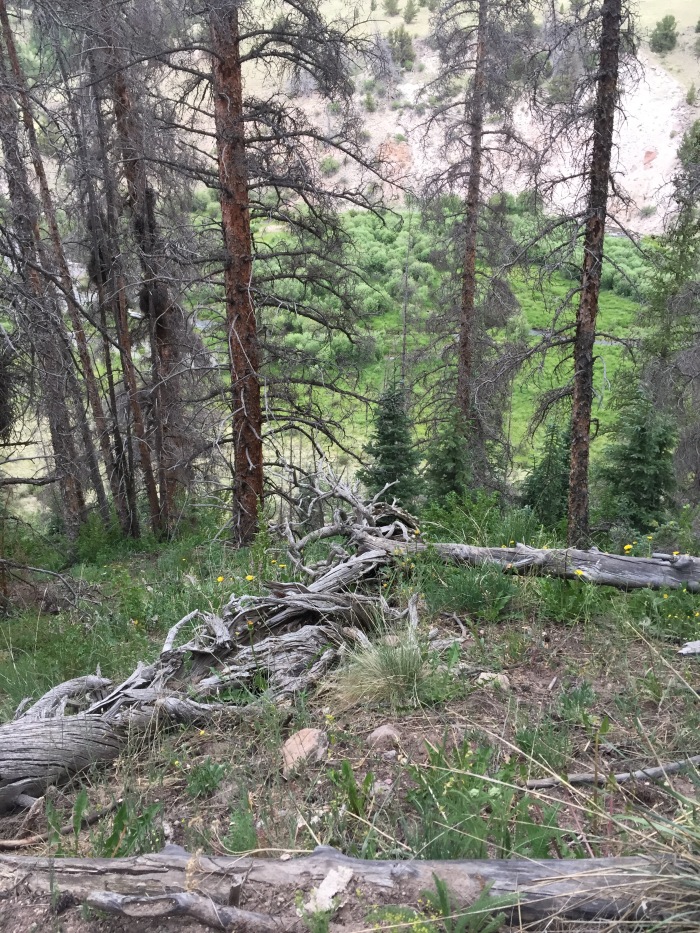 When I finally emerge at 9:30 into the meadow below the canyon rim, I stow my lunch and take off downstream.  My plan is to work back upstream by 1:00 p.m. or so and take a nice long dining break.  The going is slow–beaver have been at work, so I have to skirt the marsh and crash through the willows and alders lining the creek. 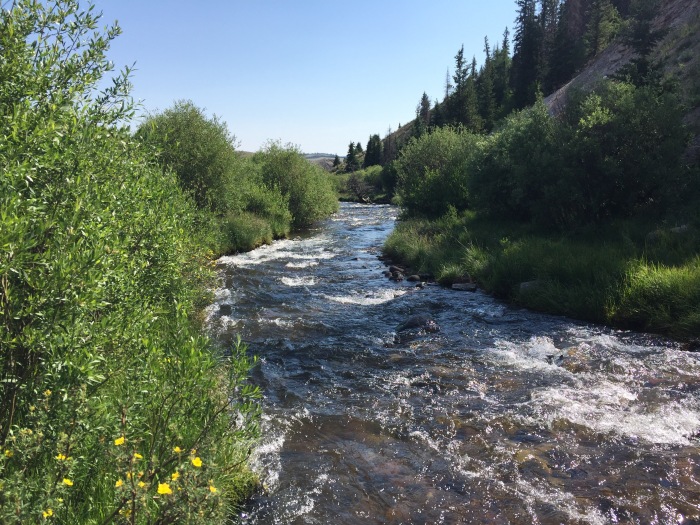 I finally come to a cliff pool that looks inviting and throw a cast into the riffles above letting my trusty Royal Coachman Trude (#16) and a red Two-Bit Hooker (#18) float into the darker water.

My nerves are on edge, expecting a strike, but nada.  Same thing at the next pool.  I’m flummoxed.  I haven’t fished up this high on the creek in over 30 years, and the last time it was lights out!  But at the third pool, things begin to heat up as the air warms.  The turning point is when I switch to a #16 Tung Teaser nymph that the fish can’t seem to resist–then it’s non-stop action for the next couple of hours for nice chunky 11-13 brown trout with some colorful brook trout thrown in as a bonus. With so much water (the flow is over 60 CFS below at the town of Saguache), I switch the dry fly to a bigger size 14 RC Trude, which is easier for the old eyes to see and is a reasonable imitation for the grasshoppers that are getting active as the sun gets higher in the sky.  It also floats like a battle ship.  When I hit the proverbial honey hole about 11 a.m., both score, surface and deep.  One of the brownies goes 14 inches. By 2 p.m. I’ve netted over 30 fish and am plenty tuckered out.  Time for lunch, but the sky is threatening and starts to spit some rain.  As I look for a place to hole up, the sun breaks through, so I can kick back, soak some rays, and enjoy the cloud show like I haven’t for years.  I see all sorts of dragons, ghosts, and other assorted creatures floating by! In my youth, I would rarely pause more than 10-15 minutes for lunch, then it was back on the water, no time to lose.  But now I stretch them to 30 minutes and even–gasp–45.  And I take more time to enjoy the wildflowers before plunging back in.  The first pool I come to is just below a rocky outcropping, and I see a nice trout sipping something off the surface.  I make a good cast above him, and he casually plucks the dry.   In a minute a gorgeous native cutthroat trout slides into my net.  It’s a slam–3 different kinds of trout.  Now if I can get a rainbow, it will make a grand slam! As I work further upstream, I come to one of the beaver ponds I skirted in the morning.  I peer over the dam and see a big trout, 15 inches and maybe more.  I throw a cast above him, and he moves to take a look, but no dice.

A second and third cast with the same results, then on the fourth he takes the nymph but I only prick him and then he’s gone.  Once my heart beat slows a bit, I work the deeper parts of the pool and net several nice brownies, but not the big guy. 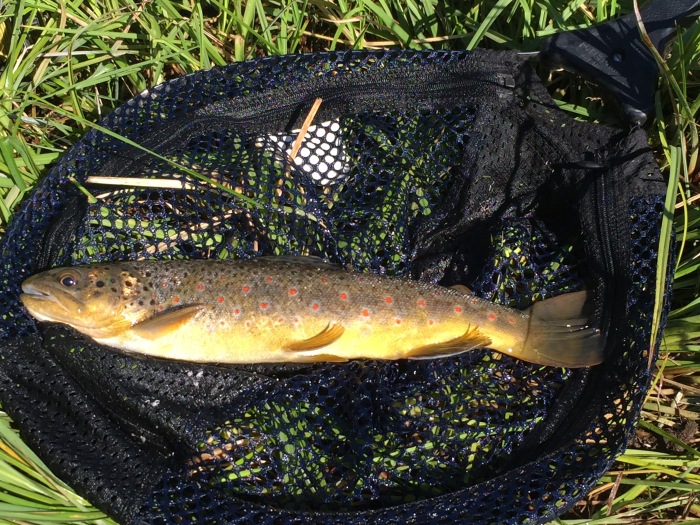 The action continues steadily for some nice browns till about 4 p.m. when the sky darkens again, and I see heavy rain around the peaks above, and the storm appears to be moving downstream right at me.  I decide it’s time to make a break for it and scramble out of the canyon so I can beat the downpour–which I do by the skin of my teeth, the wind starting to gust and big drops of rain splatting in the dust just as I get all the gear stowed in the SUV.  I hustle back down the road and then up and over the pass back to my fishing camp.

It’s been a satisfying day in nature with colorful wild trout, wildflowers, and no boot marks in a pristine setting.  I feel an uncommon calmness, that pure serenity of mind that Irving wrote about.  I’ll be back…the fishing is good here on those Indian Summer days well into October.