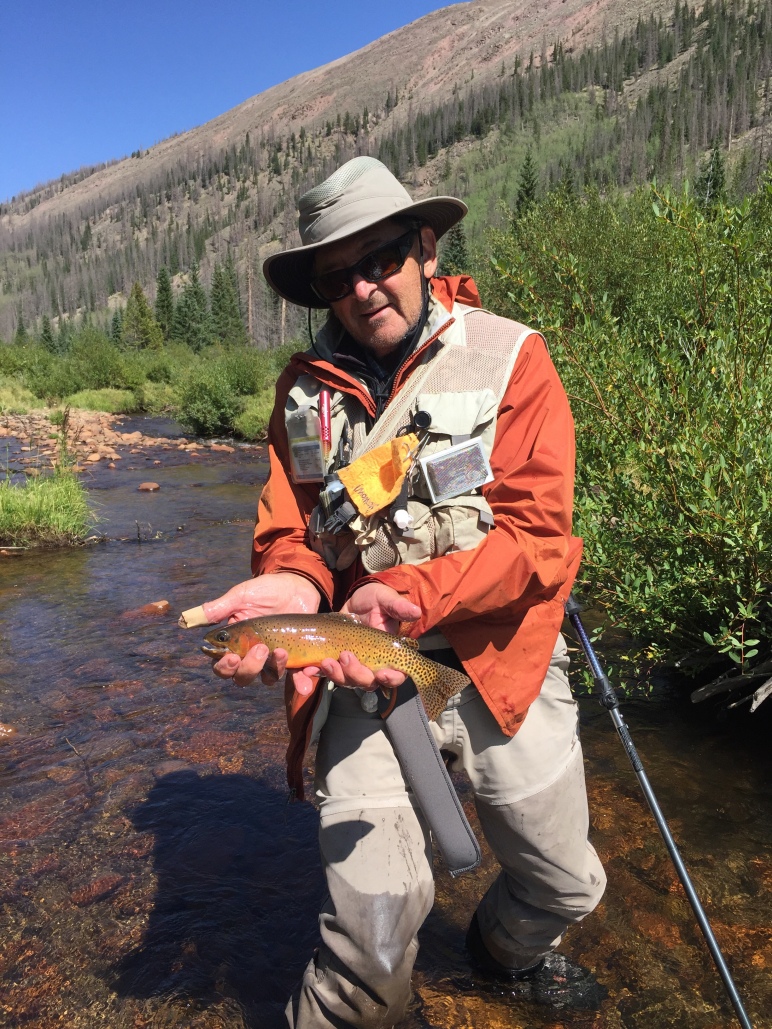 I just rolled in from my annual two-week backcountry fly fishing trip in the Colorado high country during which I was accompanied by my fishing buddy from Florida, Robert Wayne, Esq., internationally known angler and barrister (AKA “Insane Wayne”). We chase snook, redfish, tarpon and anything else that will bite in the winter in the Everglades, but during the summer he joins me in Colorado to devote two weeks to chasing Salmo truta (brownies), Salvelinus fontinalis (brookies), and other members of the trout family. Our mission on this outing: Search secret high-elevation creeks for cagey Oncorhynchus clarkia—native Colorado cutthroat.

Both of us are 72-years old, grizzled veterans of numerous trout-hunting campaigns across the USA. On this quest we faced riled-up rattlers, marauding bears, pesky camp robbers (Clark’s Nutcrackers), drought, an August snow storm (honest!), and steep canyon trails not to mention arthritis, sciatica, cataracts, and other assorted ailments well-known to septuagenarians. I am happy to report it was a rousing success! Using our small RVs as mobile fish camps, we managed to catch and release dozens of trout while covering three-to-seven miles on the water each day without any major disasters that might have called for hitting the rescue button on our emergency satellite phones.

We called upon our accumulated wisdom and prodigious casting skills to overcome skinny, crystal clear water in narrow creeks, pernicious grasping overhanging trees and bushes, and other impediments to outwit wild and shrewd trout (with brains the size of a quarter). Our best flies were the redoubtable Royal Coachman Trude dry that imitates both grasshoppers and caddis flies and the Tung Teaser and Beadhead Sparkle Caddis Nymphs that are excellent facsimiles of the two predominant aquatic bugs in these creeks, mayflies and caddis.

Mr. Wayne had his sights set on catching native cutthroats in each of the waters we plied which he accomplished in admirable fashion, the high point being a muscular 14-inch beauty, a big fish for any small water. Add to this piscatorial slams on several of the streams we fished—brownies, brookies, and cutts–and it all added up to a grand expedition.

Mr.Wayne’s culinary skills were also on display each evening back at camp, featuring delicious homemade meals including a hearty chicken vegetable stew and zucchini lasagna. When coupled with free-flowing bottles of pinot grigio and pinot noir and a daily ibuprophen fix, all bodily aches and pains were eased while assuring strength and nimbleness for the following day.

Here’s a visual recap of our trip: