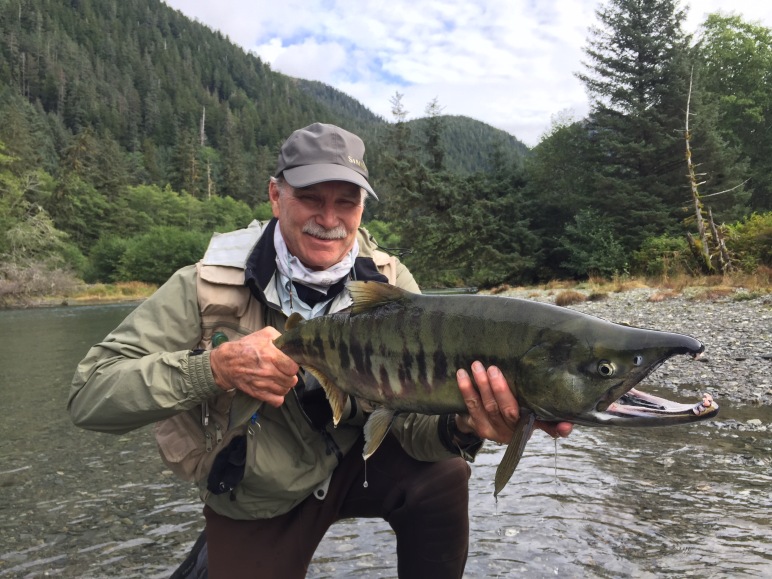 I’m up earlier today—the boat ride to the Nakwasina River will take almost an hour, and  my guide Tad Kisaka wants to get a jump so we’ll have a full day chasing salmon.  My stomach is growling, but to my chagrin I find that the hotel restaurant isn’t open for another hour!  Fortunately, out of my third story window I spot a Subway shop just across the street so set out in my waders for a delectable (well, at least filling) flatbread egg and ham sandwich.

The Nakwasina was purportedly named by a Russian navigator.  According to a 1949 geologic/place name study it reportedly means “fermented” in Russian.  Doesn’t sound Russian, but who knows.  According to Tad it’s loaded with big chums and gnarly male humpies.  That’s the music I like to hear.

We are motoring out of Crescent Harbor where Tad moors his boat at 7:45 and then slowly through Ann Harbor which has a long no-wake zone.  Big fish processing plants line the shoreline, attracting scads of noisy gulls and even some eagles where fish remains are dumped.  I spot an otter swimming insouciantly on his back—that’s always a good omen!

Mount Edgecumbe, a volcanic peak, looms over Kruzof Island to the northwest of Sitka.  As we reach running speed, there is just a light chop on the water, and the sun is peaking through occasionally.  Rugged mountains line the route.  When we reach Nakwasina Sound, the wind is dead calm and the surface glassy slick.  We can see salmon surfacing here and there at the mouth of the river. Tad navigates carefully through the shallow river flats upstream as far as he can, then we hop out and make a pile with our gear for the day—fly rods and reels, big net, backpacks and fly vests.  Tad heads back out to deeper water where he’ll anchor the boat and kayak back in. 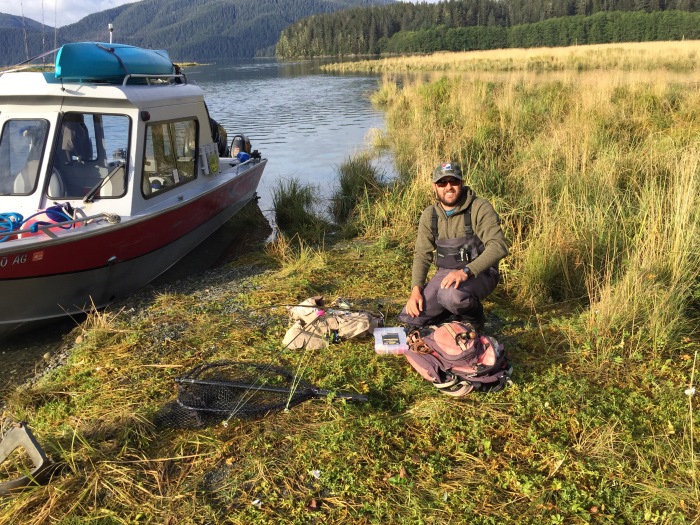 In the meantime, I head upstream to a good-looking pool where salmon are occasionally breaking the surface.  I spot a dark line of torpedo shapes on the opposite shoreline—a big school of pinks!

I throw a long cast, using a double-haul to get the extra distance I need to reach the fish, and let th flashy purple and pink streamer bump slowly downstream through the school.  A couple of pinks follow it, then suddenly a bright flash and I’m onto a nice silver!  The salmon tail walks then bores downstream with me in hot pursuit.  After a good fight, she’s on the shoreline for a quick release.  Great start!   By the time Tad is back, I’ve landed a half dozen feisty pinks. Tad and I work our way upstream towards what he promises is the salmon mother lode.  The pinks are everywhere in big schools, and in the deeper runs we spot some outsized chums.  The fertility of these salmon runs never ceases to amaze me.  Such natural abundance is such a treat to see…and reminds me of the sacred duty all of us have to pass it on to future generations unimpaired. I see a couple of big chums hunkered down against the opposite shoreline and arch a cast above them, letting the bright pink fly drift slowly, tantalizingly in front of their hooked jaws.  No dice after a half dozen perfect floats.  Tad suggests changing to a Dolly Lahma fly, a black and white marabou fly that is deadly in Alaska. On the first cast, one of the big chums rockets forward and inhales the fly, then erupts on the surface when I set the hook.  It’s a monster—probably pushing 15 pounds!  He does a 50-yard dash downstream, turns around and shoots forward through the riffles into the next pool, then back again.  Compared to freshwater fish, salmon are like Arnold Shwarzenegger versus the girly men Hans and Franz.  Here me now and listen to me later, they can fight!  My 9-foot,  7-weight fly rod and 10 pound leade are put to the test, but hold. Tad runs downstream and positions himself to net the leviathan, but the fish eludes him several times.  Finally on the third swipe, he’s in the net.  One of the biggest chums I have ever caught…a beauty. We find throughout the day we have to keep changing flies after catching a few salmon on one pattern.  Apparently familiarity breeds contempt.  I pause to lounge in the sun that’s beaming down, usually MIA this time of year.  I few gnats are flitting around my head, but not to worry.  All is copacetic.  Until one of the little critters takes a chunk out of my hand.  Gnats indeed—it’s a pestiferous swarm of no-see-ums, microscopic flying sharks smaller than gnats but with some of the biggest jaws compared to body size in the insect kingdom according to entomologists.  I never dreamed I would run into them in Alaska.  Mosquitos, yes, but no-see-ums?!?  Luckily I have some bug repellant in my fly vest.  It’s not the 100% Deet concoction I use in the Everglades, but good enough to keep the little buggers at bay for the day if I spray it on every hour.

The bugs spur us back into action—which continues in every deep run as we work upstream.

We find a deep, fast-running pool with snags all around, but with careful casts and retrieved manage to coax several nice silvers out of it plus some pinks.  Then further upstream we hit a big school of humpies, and a big male sucks in the gaudy streamer.   He puts up a great tussle.  Male humpies turn into gnarly looking creatures, with the trademark big humps and dog-like jaws.  I always have to laugh when I net one—a face only mama could love. After we release the big fellow, Tad spots a couple of ghostly apparitions with black tails among the humpies—tell-tale signs of silver salmon.  I carefully place my fly above them, but they ignore it as it floats by only a few feet from their snouts.  But then one turns and jets downstream and nails the streamer.  Fish on!  The silver scatters the school of pinks as he rockets around the pool.  Such fun to pick up the odd silver among the humpies and chums—we’ll net a half dozen or so  of the prized fish  during the day.  They are excellent eating—some of the best salmon—but I can’t bear to kill such beauties, so off they go to fulfill their destiny.

By early afternoon, we’ve explored a mile or so upstream and then hit a deep hole and a thicket of downed logs.  We decide it’s a sign to work back down to the first honey hole.  I insist Tad make some casts, and he immediately nails a big chum.

Then it’s my turn….and another good one comes to the net.

Then we’re back to the pickup point, and Tad slips in his kayak and glides out toward the mother ship.  By the time he returns, I have caught eight more pinks—just too much fun for one day.  Together we have probably caught and release 75 fish in a pristine wilderness setting.  Not a boot mark anywhere. As a bonus, it’s been another day of no rain—a big surprise—and the sun is popping out again, making for a relaxing run back to Sitka. 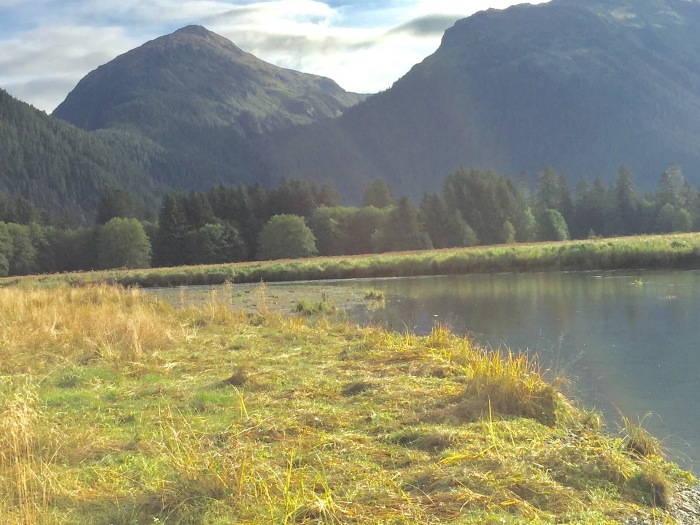 With all those salmon we have caught, I’ve developed a hankering for a fish dinner.  Maybe some halibut tacos?  Or fresh salmon sushi?  Ah, such tough choices, but someone has to do it!