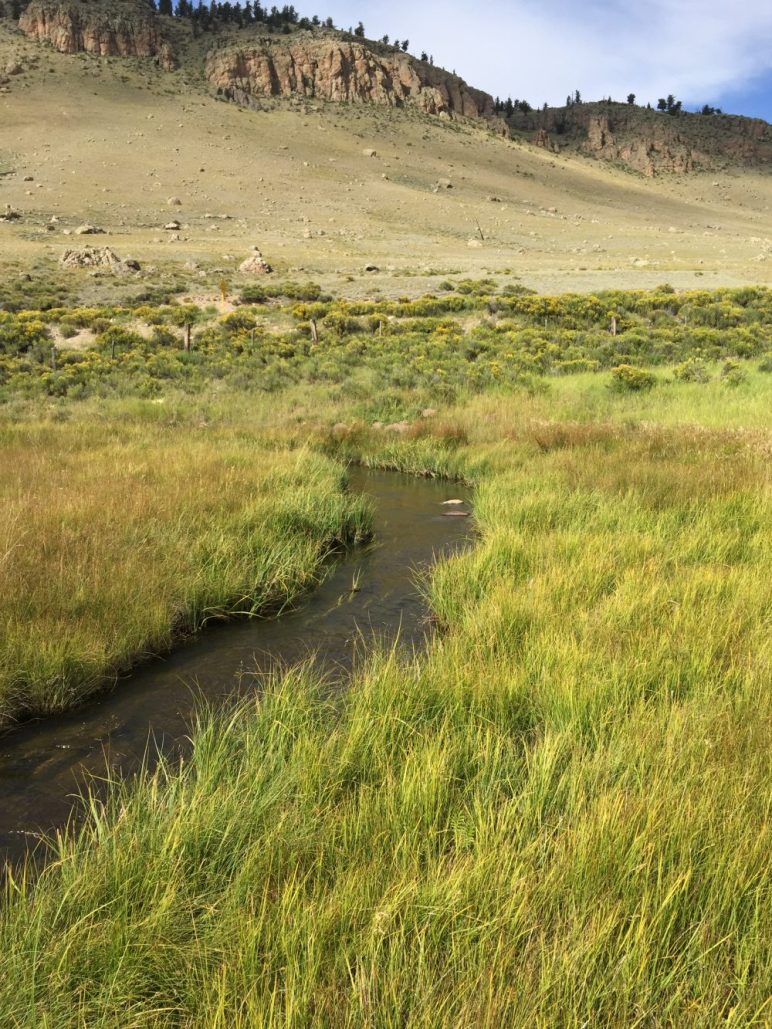 Earlier this week I had a delightful day on the lower section of little Archuleta Creek just above where it joins with Cochetopa Creek 20 miles or so southeast of Gunnison. (See my article titled Day 1 on Archuleta Creek.).  Yesterday I drove over the Continental Divide to beautiful Saguache Park and fished the headwaters of Saguache Creek.  The brown trout and brookies were ravenous.  So after a long day of fishing and driving over rough backcountry roads, I

am lollygagging about and staying close to camp on Upper Dome Lake.  Around 10 a.m. I decide to take a stroll out on the rock-faced earthen dam to see if any fish are rising in the lake….and they are!  But even more intriguing, I see dimples on the surface of the water below the spillway, a very short section of Archuleta Creek that flows into Lower Dome Lake.  In all my times fishing and camping up here, I have never seen anyone fish this stretch below the lake, hidden in plain sight!  I retreat post haste to the mobile fish camp and rig up my fly rod with a tiny #20 black midge dry fly that has done well for me in the lake and the creek.  I double-time it back to the dam and creep down the rocky slope towards the lake, not wanting to spook the rainbow trout that are rising all along the shoreline.  A good-sized one cruises insouciantly in front of me, picking off small bugs on the surface, apparently oblivious to my presence above.  I carefully loft a cast so that the microscopic fly alights gently five feet in front of him.  He spots it, jets forward, and WHAM, he’s on!!

END_OF_DOCUMENT_TOKEN_TO_BE_REPLACED

When fly fishing, nothing is more fun than watching a hungry trout zip from a hiding place to nail a dry fly with a showy splash on the surface—except maybe if you are using TWO dry flies, and the fish is in trouble from seeing double which means double the fun for the angler!

But there aren’t many times when double dries really work, one tied to the other, trailing behind a couple of feet.  On bigger waters, the current will inevitably mess things up, dragging one fly too fast or dunking the other.  Which is a sure sign to the trout of a fraudulent bug!  But I discovered it’s the perfect technique on Archuleta Creek, a little sister tributary to Cochetopa Creek, high in a mountain valley 20 miles southeast of Gunnison, Colorado.  (See my earlier articles about Cochetopa creek in 2015.)

The stretch of Archuleta Creek I have my sights on today is a tailwater below Lower Dome Lake, a

state wildlife area with primitive camping facilities.  Being a tailwater that draws its flow from the surface of the lake, the creek’s temperature is warmer and fairly constant, and the water very fertile.  It has an abundance of aquatic vegetation, which is good for growing bugs and for hiding trout, but not so good for the typical rig I and most trout anglers use these days—a dry fly on top with a nymph tied onto the dry that sinks and trails behind.  It’s a deadly combo that gets fish on top and down below (where  fish feed most of the time)…except in places like Archuleta Creek which is shallow and where a sinking nymph will pick up a lot of moss and other detritus or just plain snag on streambed rocks.  Which can lead to extreme consternation and blue language against a blue sky.

Archuleta Creek trout are partial to very small flies, feasting on tiny mayflies, caddis, and midges that hatch throughout the summer on most days.  I’m talking microscopic—size 20-24.  Flies this small are extremely hard to see, especially if floating against the bank in a foam line, if you are looking into the sun in the afternoon, or it’s cloudy.  In other words, most of the time.  For me, the savior on Archuleta Creek and others like it has been to tie a

bright yellow strike indicator—a piece of yellow yarn—a couple of feet above the fly so I have a general idea where the little thing is which allows me to set the hook more quickly when a trout sucks in the dry fly.  Sometimes the trout will even strike the yarn!!  Which got me to thinking, why not use a larger dry fly as a strike indicator, in this case a size 16 green parachute grasshopper pattern to imitate one of the hordes of hoppers buzzing about the meadow here in August.  It would be easy to see with that big white parachute top and floats like a battleship.

Now I am off to test my new rig and theory on Day 1 of a five-day stay in my mobile fish camp parked at Upper Dome Lake, formed by a big rock and earth dam across Archuleta Creek.  Let the experiment begin!!

END_OF_DOCUMENT_TOKEN_TO_BE_REPLACED

CAVEAT: The North Fork Road has reopened, but is still very rough.  Call ArkAnglers in Salida, CO for latest information.

For my articles about fishing nearby Arthur and Hunky Dory Lakes see:

Monsoon rains blowing up from the Gulf of Mexico have been soaking us here in the Colorado mountains most afternoons.  It’s no fun and dangerous to be up near the Continental Divide hiking and fishing when a storm blows in.  Temperatures can drop from 75 degrees to 45 in a few minutes replete with mountain pea-sized hail that

resembles snow.  So when the weatherman predicted a sunny day this week, I fetched the day pack from the basement along with my mountain lake fishing gear and plotted a trek to a high-country lake I have been hankering to try–Island Lake far up the North Fork Valley about 20 miles west of my cabin near Salida.  It’s perched at 12,000 feet just below Sewanee Peak that pokes up into the sky at a mere 13,132 feet.  A thirty-year old guidebook I have tells tales of huge, but finicky cutthroat trout in the lake, a story confirmed in hushed tones by some local fishing guides.  So I hit the road at 7 a.m. the next morning, figuring it will take an hour to drive up the rough 4WD road to the trailhead and another hour to hike in.  Visions of behemoth trout are dancing in my head.

END_OF_DOCUMENT_TOKEN_TO_BE_REPLACED

“Every creature is better alive than dead, men and moose and pine trees, and he who understands it aright will rather preserve its life than destroy it.”   Henry David Thoreau

It’s a cloudy morning at my campsite on the Conejos River west of Antonito, Colorado.  I’ve slept in a bit late after a long day on the water yesterday, and anyway, rain is in the forecast. But by noon the sun is starting to peek out, and I’m getting the itch to explore.  Given the late hour, I need to find something close by that won’t take hours to reach so settle on the Los Piños river, a popular stream only 20 minutes away. I have fished the Pine below Trujillo Meadows Reservoir near the New Mexico border and have had decent results.  But I have never been in the more remote headwaters above the lake where the banks are not dotted by cabins or tromped by cattle.

I talk with one of the experienced old hands at the campground, and he draws me a little map.  It’s a tricky route to the trailhead up the river canyon, so I am happy to have some directions, especially later when I find the topo maps are out-of-date.  I load up and head out on Highway 17, over La Manga Pass and then hit the turn off for the Trujillo Meadows Reservoir just before the road angles over Cumbres Pass.  It’s a beautiful drive, capped by a close-up view of the narrow gauge train chugging along the lower Los Piños on its way to Chama, New Mexico.  I keep my eyes peeled for the sign for Forest Road 118 to the upper Los Piños and a waterfall that is a popular scenic attraction…then it’s off into the wilds, four-wheel drive at the ready!!

The gravel road is fairly smooth at first, but all that changes when I follow my hand-drawn  map and make a right turn a couple of miles up the road.  I cross a little creek that runs under the side road in a culvert, then switch into four-

wheel drive as the road begins to climb and gets much rougher.  The next waypoint is an orange barrel where the road splits, and  I have been cautioned to stay left–and rightfully so.  The fork to the right looks smoother, but it soon turns nasty,  big rocks and muddy holes making it nearly impassable in places.  Not to say that the left fork is a picnic.  Passenger cars need not apply!!  It’s four-wheel only.  Lots of deadfalls across the road from the beetle kill (hello climate change) mean I have to thread the needle several times where the Forest Service has cleared the way.  After a couple of more miles, that

a very rough steep stretch, I arrive at the waterfall trailhead…and find a cadre of ATV’s and a jeep already there.  When I have more daylight, I want to hike up above the waterfall, which acts as a barrier to non-native trout, allowing the beautiful native Rio Grande Cutthroat to thrive.  But for now I’ll go contrarian and head back down the road for a 1/2 mile where I spotted a section of the river down in the canyon that looks inviting!  And I should have it all to myself.  I suit up in my waders and  carefully pick my way down the steep but short slope that is overgrown with wildflowers and bushes–this is a lush valley that gets plenty of moisture.  I see fish rising in the pools!!

END_OF_DOCUMENT_TOKEN_TO_BE_REPLACED 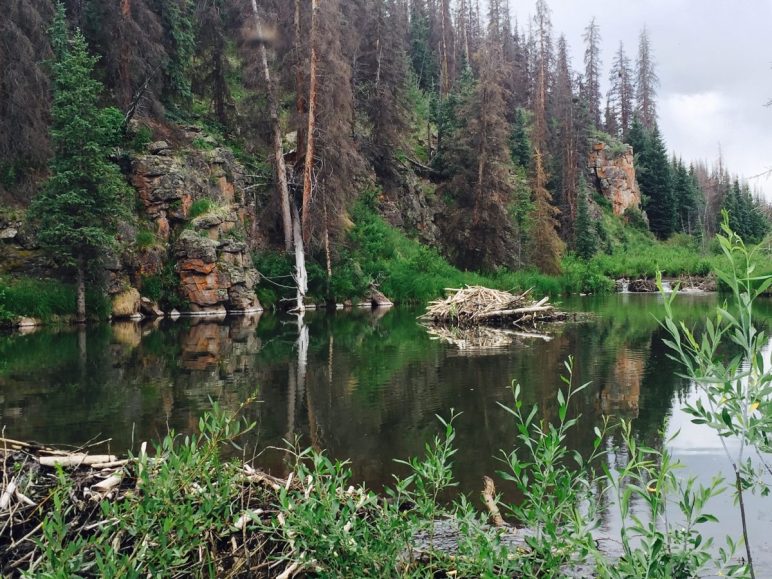 “Perfection is a road, not a destination.”

I am always on the lookout for a backcountry creek, preferably in a remote canyon or wilderness area, featuring great scenery, abundant wildflowers, and eager trout.  I love that feeling of discovering an untrammeled piece of our planet Earth or at least one that is very lightly trodden.

Area south of Gunnison, Colorado. With a name like Perfecto,

how can one resist??  Where the gravel U.S. Forest Service road crosses over, it’s barely a rivulet, but I spied some big inviting beaver ponds not too far below.  And with some topographical map and GIS sleuthing, I find that just a mile down downstream Perfecto is joined by Chavez Creek then paired up they descend into a canyon on the way to a rendezvous with Pauline Creek (See my article on Pauline Creek from 2015.).  That may mean enough water to float some decent-sized trout.