On my homestead in the Colorado high country, the main tree is t

he Piñon Pine interspersed with a smattering of juniper and, along the creek, some big willow-leaf cottonwoods.  Truth be told, until a few years ago I never made the connection between these tough, short trees that dominate the dry southwest landscape in Colorado, Utah, and New Mexico

—over 36 million acres of them–and delectable, pricey pine nuts.  The best pine nuts are actually the seeds of the Colorado Piñon Pine (Pinus edulis).  Shelled, they go for about $36 a pound!!  A lot of what is pawned off as pine nuts in the grocery store comes from…surprise…China!!

The Piñon is the foundation species in this ecosystem—everything is built upon it.  Birds like the Piñon Jay and Clark’s Nutcracker (pictured) as well as rodents

feast on the seeds and are in turn food for the coyotes, owls, hawks….you get the picture.  The birds and rodents help spread the seeds far and wide.  Because of the dry climate and generally poor soil, the trees produce seeds only once every four to ten years.

Native American tribes like the Utes, Hopi, and Shoshones and, later, Hispanics.  When the rabbit brush bloomed in the fall, it was the sign for these tribes to gather in large groups to harvest the pine nuts, which are not only tasty but rich in carbohydrates, fat, and protein.  The tribes would stay and harvest pine nuts until the snow flew, and then retreat to their winter camps at lower elevation.  The nuts helped them survive the harsh winters while the trees also supplied fuel and building material.  The nuts were ground up into a fine meal then mixed with water to provide a nourishing soup, their main winter food.  The Native Americans nurtured the best pine forests, weeding, pruning, and watering to improve their productivity. The University of Nevada has produced an excellent video about Native Americans and pine nuts at http://imedia.unr.edu/unohp/tah_gum/tah_gum_640X480.html.  Pine nuts continue to play an important ceremonial role among Native Americans in the Southwest today.

Incredibly, in the 1950s and 60s, government ecologists declared Piñon and

juniper invasive species that were destroying grasslands.  They gave the green light to uprooting millions of acres of the trees by chaining—a process that ripped the trees out along with just about anything else in the vicinity.  The massacre was actually recounted in a documentary narrated by Robert Redford, Broken Treaty At Battle Mountain.  Not surprisingly, the wholesale destruction of these foundation species was an ecological disaster for all the critters that relied on them.  Fortunately, in many of the devastated areas, the Piñon and juniper are staging a comeback.

With all those millions of acres of Piñon trees, you might think we’d be rolling in delectable pine nuts.  But after I spent a couple of days harvesting the cones that shelter the little nuts, I understand why they are so dear.  First, only about one-in-four or five trees on my land had any pine cones, confirming the fact that individual trees bear only once every four-to-ten years.  Second, harvest must be timed exactly right—too soon and the tough green cones won’t open, but a day too late and they have

dropped their nuts that are quickly spirited away by the birds and rodents.  Then, if the timing is right and cones are beginning to open, they must be picked by hand from the trees—and the word sticky does not do justice to the amazing glue-like quality of the resin that oozes all over them.  And finally, while some of the cones will surrender the nuts after a good bout of sunbathing on the porch, an equal number will have to be dug out of their protective sheaths.  Did I mention shelling???

Here is a step-by-step illustrated guide to the process, learned through the school of hard knocks:

#1:  Find trees with plenty of ripe cones and harvest by hand.  Native Americans

branches to reach more cones.  I use a hoe with a coat hanger fastened to the end.  I wear gloves for this task and have plenty of goo gone liquid on hand in the cabin for cleanup.  The cones ooze a sap that sticks to everything….gloves, clothes, you name it.  I toss harvested con

es into a plastic tub or old laundry basket and move from tree to tree.  Native Americans used hand-made woven baskets that they wore on their backs to hold the cones as they harvested.  As Yogi Berra would have said, it helps to have help…like my friend Lisa!!

#2:  Set the cones out in the sun to warm and coax them to open wid 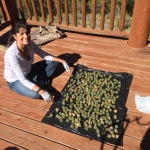 e and drop their seeds.  I place them on a big black plastic bag out on the porch of my cabin.  But beware—you can’t leave them out overnight or the pesky little squirrels and chipmunks will have a feast.

#3:  Finish removing the nuts from the cones that have

not dropped all their bounty.  Native Americans pounded the cones with a stout foot-long log to dislodge remaining nuts.  I use a corn skewer to pick out the little rascals.  This is a great way to relax—fire up some tunes on the cell phone or a football game on the radio then pick away.  Also can be a nice family affair around the picnic table outdoors. 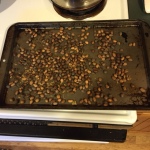 it easier to crack the shells.  Native Americans used charcoal from fires built among the Piñon trees to accomplish this task, throwing the hot coals into large flat baskets filled with the nuts and then tossing the mix into the air until roasted.

#5:  Shell the nuts–probably the toughest of all the steps.  Some people eat them like sunflower seeds, cracking them with good old teeth to get to the meat.  For use in salads, soups, etc., you can open each shell individually with a nut cracker or pliers, standing them on end in the jaws and cracking the shell gently then removing the meat inside.  You can also use the

technique perfected by Native Americans, who would roll a rock over the roasted shells, cracking many at a time.  Some pine nut cognoscenti freeze them to hasten the cracking process and then use a rolling pin.  Caution:  It’s not as easy as it sounds.  Push down too hard on the rolling pin and you will have nothing but mush left.  I have my eye on a mechanical hand-crank shelling machine for next season that sells for about $170.  Ah, high tech!!

There you have it.  Home harvested pine nuts that are ever so much better than the grocery store variety.  And the connection with the land is free in the bargain!  Come join me next year for the harvest in September and October.  Complimentary accommodations, and I’ll throw in a guided fly fishing trip as part of the deal!