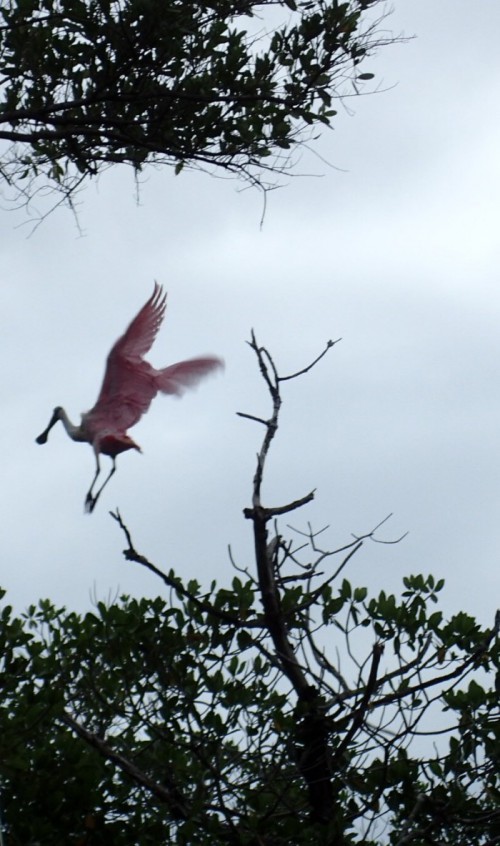 Yesterday I was out in the Everglades backcountry on my annual pre-Thanksgiving anticipatory calorie reduction kayak trip.  It was a beautiful day—sunny sky, and the wind hadn’t kicked up yet.

I was gliding over the crystal clear, copper-tinged water with a smile on my face.  But like every fishing/kayak trip this past week, something was gnawing at me.  It didn’t feel right to be enjoying myself so much and soaking in the wonderful gifts of nature all around me when there seemed to be so much hurt, so much evil in the world around us.  In France, in Mali, in Lebanon common folk like me were suffering terrible pain at the hands of misguided zealots from ISIS and other fanatics.

That thought tagged along with me as I emerged from the first mangrove tunnel into one of my favorite shallow lakes and was treated to an incredible sight–a flock of magnificent wood storks, an

endangered species, slowly spiraling in a vortex  into the blue.  They were riding a thermal, rising higher and higher with hardly a wing beat.  Soon I had caught and released a couple of nice feisty snook, then plunged into another mangrove tunnel.  As I rounded a bend in the creek, I saw a big…and I mean big….black form laying in the  shallows 50 feet in front of me just as I was getting reading to dismount and make a cast into the deep dark bend pool where the best fish usually hang out.  “Shark” my mind flashed, as some big bull sharks occasionally swim up the creek from the bay.  Then I realized it

was an American crocodile—long snout, body more slender than an alligator, and much shyer.  It shot off into the pool in a flash and disappeared.  It was only the second American crocodile I have ever seen.  What a treat!!

By noon, I had caught a half dozen decent snook and decided to anchor up on a sand bar as the tide shifted and started to flow in hard, which meant if I waited a

bit I could ride it back to the car without much effort.  As I looked upstream, I

saw a hint of pink in a tree.  It was a gorgeous roseate spoonbill, the only true native pink bird in the USA.  I got my camera out and peddled upstream (yes, a peddle kayak), to see if I could get a shot.  The normally shy spoonbill gave me some suspicious glances, but held steady till I got close, then on cue it took off, it’s big wings pounding as I got a good shot.  My luck was holding!!

Beaming, I pulled up the anchor and started floating back to the put-in.  On the way I had to laugh at the gang of blue crabs I sent scurrying whenever I boated over some shallows, waving their menacing claws at me in the water to scare me off as they jetted backwards to safety. The sun was

getting low in the sky as I hit the final leg of the trip back, but there was one last secret spot I had to try.  Last year I had discovered a little creek that wended through a short mangrove tunnel off one of the big lakes into a shallow pond—only a couple of feet deep.  I had seen some big snook in here where the water was warmer, and sure enough as I exited the tunnel, I spied something chasing bait

across the surface on the other side of the pond under some mangroves.  I paddled quietly within casting distance and let fly….and immediately something exploded on my lure.  The fish took off like a torpedo, then thrashed to the surface—a big snook.  He shot under the nearest mangroves as I bailed out of the kayak in pursuit.  Fearing the worst, I was shocked when the snook reversed course, somehow untangled himself from the mangrove roots, and zoomed back in the open as he catapulted out of the water.  Soon he was next to the boat, almost 30-inches long, a trophy.  A quick picture, and he swam away nonchalantly.

As I headed back through the mangrove tunnel to the car, it dawned on me that all afternoon I hadn’t thought about the terror in Paris or about the bewildering events in Syria.  Nature had given me a gift and message:  In the face of these horrible events and trying times, we should carry on, embrace our normal routines, be grateful for the gifts of family, nature, and the world around us.  That’s not to say we forget about those suffering or our lessen our resolve to end the terror and carnage, but that if we let those things control and alter our everyday lives or inspire fear then the villains and their evil have won half the battle.  So on this Thanksgiving, embrace your families and be grateful for all that is good in your lives, like the gifts nature so generously bestowed on me yesterday.  And don’t worry about eating too much!

2 thoughts on “Thoughts on Thanksgiving, ISIS, Terror, and Being Grateful”