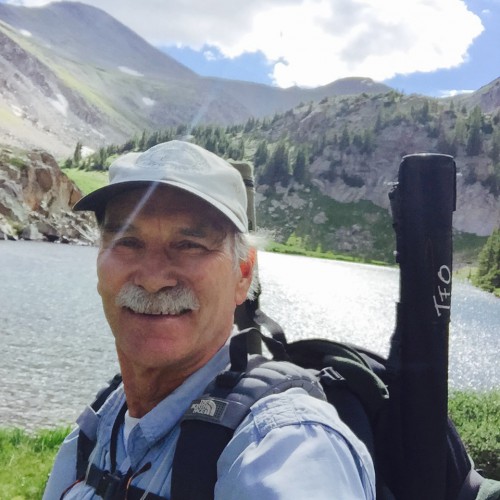 CAVEAT: The North Fork Road has reopened, but is still very rough.  Call ArkAnglers in Salida, CO, for latest information.

For my article about fishing nearby Island and Arthur Lakes see:

More rain this week kept me off the local waters, and with the weekend looming along with the  attendant crowds from the Front Range, I decided to head to a high country lake for some tranquility and, hopefully, some hungry trout.  I dug out an old 1980s guidebook to lakes in the area, and the name Hunky Dory caught my eye.  With a moniker like that, it had to be good.  (More about that name later.).

Hunky Dory sits at 12,000 feet, perched high across the rugged North Fork Valley from Mt. Shavano, a 14er.  The turnoff of US 50 up County Road 240 is at Maysville, about 10 miles west of Salida.  What made it especially intriguing is that the guidebook said there was no trail to the lake.  The hike was described as fairly short—just over a mile—but very steep, gaining 1,200 feet in that short distance.  A check on the internet revealed a couple of entries describing the fishing for cutthroat trout as good.  Who could resist.

Hunky Dory, being a new water for me, I packed both my fly fishing and ultralight spinning gear.  If there was enough room around the lake for a good backcast, I would use the fly rod; if not, then I’d go with the ultralight spin outfit with a clear plastic bobber heavy enough to cast a fly but still be somewhat invisible to the fish (AKA a spinning bubble).  I decided to leave my waders, boots, and fishing vest in the basement, given the likely rough hike, and keep my tackle to a minimum—one fly box (honest), clippers, leaders, etc., all of which fit into a little plastic bag.  It turned out to be a wise choice.

I headed out on US 50 and made the turn onto Country Road 240, which for the first five miles or so is paved and then good gravel to the Forest Service Angel of Shavano Campground.  After that, buckle up.  The guidebook and old postings on the internet indicated that the North Fork road is passable with a standard passenger car.  Don’t believe it.  It is very rough, suitable only for 4WD vehicles.  Average speed is about 10 mph.  The “trailhead” is almost exactly eight miles up from the turnoff and two miles below the North Fork Reservoir.  Apparently at one time there was a USFS sign for the old mining ghost town of Shavano near the trailhead, but that is long gone.  Only a few hard-to-see ramshackle cabins back in the woods mark the spot.  On the USGS topo map for the area (Garfield), the trailhead is one-third mile past the marker for Forest Service Road 240G and to the left just after you drive over Cyclone Creek.  A few feet south of the road there you will find a minimalist footbridge crossing the rushing North Fork of the South Arkansas River.  Cross the North Fork and be prepared for an adventure.  DO NOT attempt this trek without a USGS Map (available free at http://www.usgs.gov/pubprod/maps.html) AND a reliable cell phone GPS app (like Motion X-GPS which has served me well).

The faint trail immediately starts to climb up the ridge to the south. 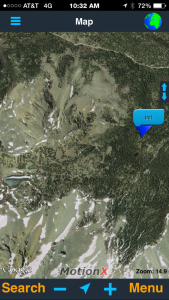 Try to stay on the spine of the ridge as you ascend through the woods, hopping over boulders and downed trees.  This is not climb for the infirm or faint of heart.  It took me almost two hours to go the one mile, with quite a few breaks to catch my wind and check my GPS to make sure I wasn’t lost.  Do not descend into the valley to the east—called Hunky Dory Gulch on the USGS map which holds the creek that drains Hunky Dory Lake.  The terrain there is marshy and overgrown.  I am speaking from experience.  GRRR.

I triumphantly emerged from the woods about 10:30 a.m., guided the last one-half mile by the sound of the rushing creek—which I figured had to be the one coming out of Hunky Dory Lake. 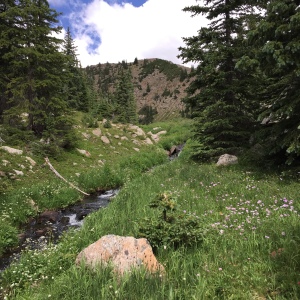 My guess was right, although a couple of false summits had me checking the GPS.  Gorgeous wildflowers—monkshoods, mountain paintbrushes, asters, and columbines–carpeted the last quarter mile along the creek, and the view is spectacular.  Best of all, I could see some trout cruising the shallows and dimpling the surface as the picked off some easy meals.

I didn’t spy any trout on the shallow flats on the south side of the small lake, which is shaped a bit like a frying pan with the handle pointing to the east.  The darker colored, deeper water along the tree-lined north shore seemed a better bet and there was some shelter from the wind that was starting to blow down the slopes.  But the trees made use of the fly rod problematic, so I rigged up with the ultralight outfit, tied on a trusty beadhead Zug Bug fly, and clipped on the spinning bubble that allows me to cast

the fly halfway across the east arm of the lake to the drop off.  The first few casts to rising and cruising Cutthroat Trout  resulted in a goose egg, but finally a 10-incher succumbed.  He was a fat little guy, stuffed to the gills on something my aging eyes could not see on the water.  Finally after spooking several bigger ones, I switched to a simple little floating

foam black ant featuring a little white dot on top for visibility.  Viola.  As soon as it hit the water a 12-inch Cutt smacked it hard, and the fun was on non-stop for the next three hours.  Because the lake sits so high, the gorgeous Greenback Cutthroat, our native trout, were spawning late and sporting outrageous spawning colors—big reddish-orange slashes under their throats and flashy colors all the way down their sides and bellies. While these trout probably rarely see a fly, they are not stupid.  Cast too close to a cruiser, and he would bolt for the depths.  But if the cast was accurate to a riser, to the edge of the drop off, or at the inlet on the west end where the big boys and girls were spawning, a hard strike and scrappy tussle were usually in the offing. 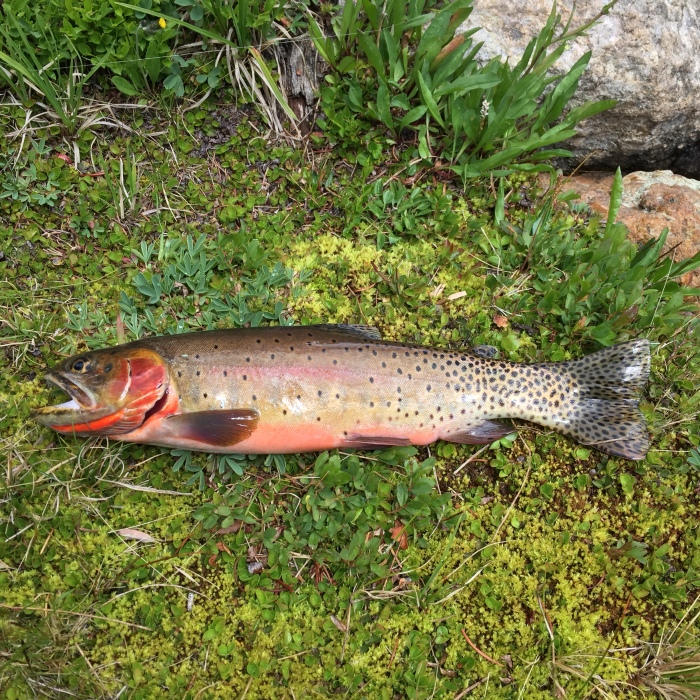 By lunch at 2:00 p.m. I had caught and released a couple of dozen and missed at least that many strikes.

Now the wind was really kicking up, blowing my hat off a couple of times and exposing my follicly-challenged pate to the intense sun.  I huddled up between to spruce and soaked in the rays.  Then something on the ridge far above caught my eye.  Three white specks… 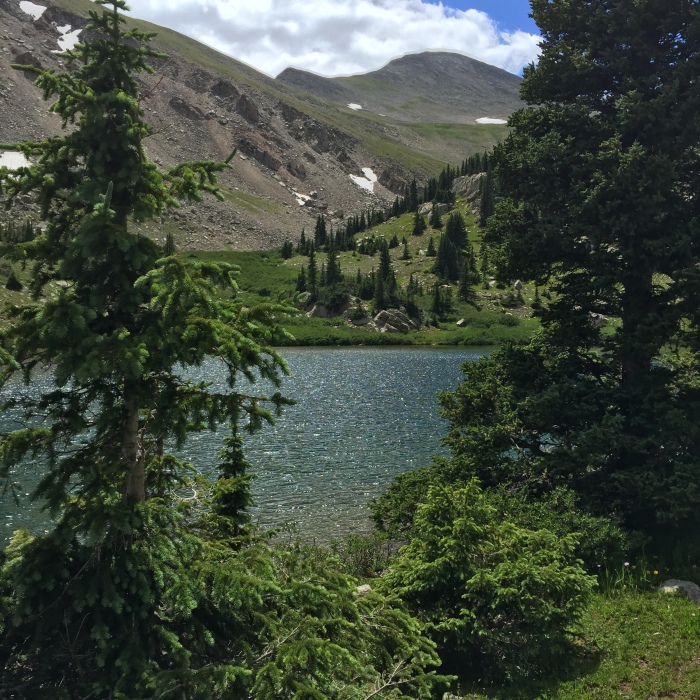 and they were moving!  My binoculars confirmed mountain goats!  Hard to believe they could eke out an existence up there or that they somehow got up that high on the scree slope just below the Continental Divide.

After a leisurely lunch, I hiked around to the south side of the lake and began fishing over the extensive shallow flats that extend a hundred yards into the lake.  There weren’t as many fish here and the drop off was too far out to use the fly rod and barely within reach of the spinning bubble outfit.  I kicked myself for not bringing some light weight wading shoes.  The bottom is solid rock, and the water is about knee deep—very cold but would allow an angler to wet wade those flats and fly cast to cruising fish without toting heavy waders and boots up the trail.  Still I was able to catch several 12-14” beauties as I circled around to the west and back to the stream inlet on the west end. 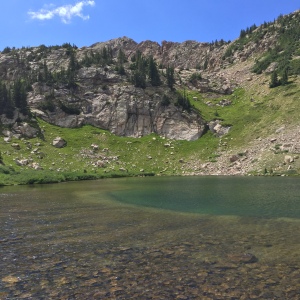 Despite the weather report for little chance of rain, some big threatening clouds blew over the divide from the southwest and a few sprinkles had me hunkering down for shelter.  I took a chance, waited it out, and was rewarded by sunny skies again in a half hour.  By the time I made it back to my gear on the north shore and headed down around 5 p.m., I had caught another couple of dozen beauties. The trek down was much easier and faster—I covered it in less than an hour.  The key was exiting over the rise on the northeast corner of the lake and following the faint trail high along the ridge before descending into the draw below (but not into the gulch further to the east carrying the creek).  I was on the trail about half the way down and bushwhacking the rest.  A hiking pole is a big help going both up and down on the steep slope.

On the way home, I smiled, thinking that the lake had lived up to its name…Hunky Dory.  That’s an old-fashioned word that I hadn’t heard or used for years.  “Everything is hunky dory” of course means all is good, copacetic, just fine.  But where did that phrase come from ?  Apparently it’s been around since the mid-1850s, used in songs by a blackface minstrel group called the Christy Minstrels.  Here are some of their lyrics:  “One of the boys am I/That always am in clover/With spirits light and high/’Tis well I’m known all over/I am always to be found/A singing in my glory/With our smiling faces round/’Tis then I’m hunkey dorey.”  Now the name Christy Minstrels rang a bell, and more digging revealed that they were the inspiration for a folk group familiar to my generation.  The New Christy Minstrels had some big hits in the 60s, won a Grammy Award and even got a guest appearance on the Andy Williams show!  Who remembers their big 60s hit Green Green (Green, green it’s green they say on the far side of the hill…).  Oh well, I am dating myself.  If you want a good workout, solitude, and some fun fishing, give Hunky Dory Lake a try–but be careful up there!