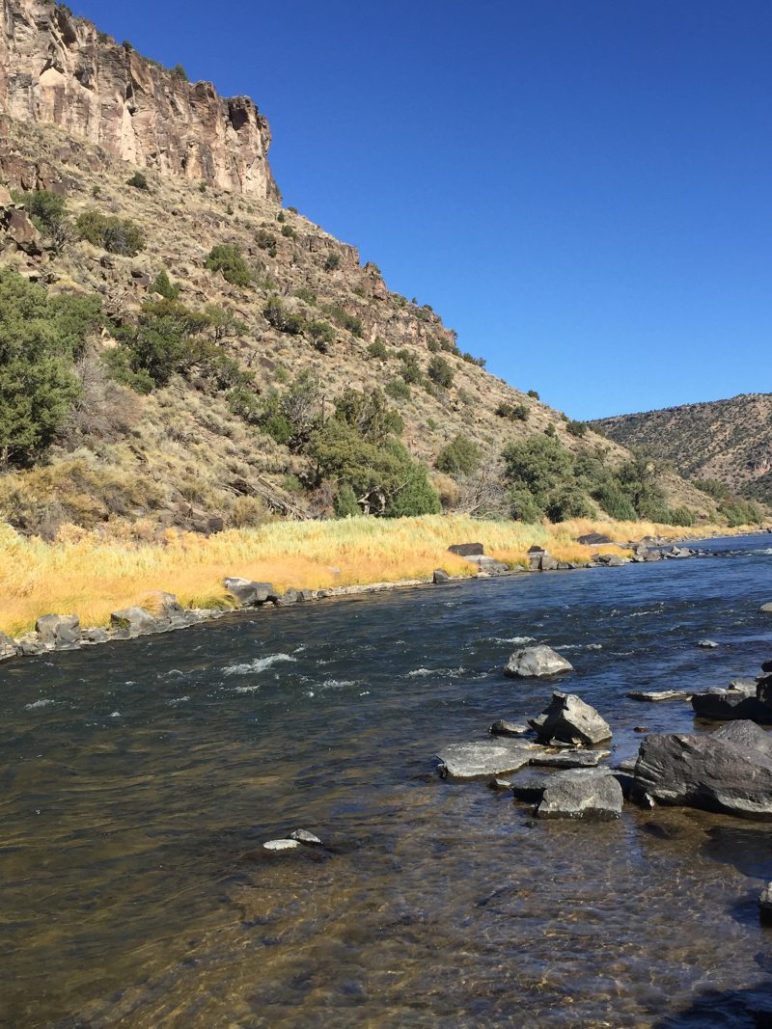 Taos, New Mexico, is the first stop on my annual migration from Colorado to the Everglades where I spend the winter chasing snook, reds, and tarpon.  It’s a short four-hour drive from my summer haunt near Salida, Colorado.  I haven’t been to Taos 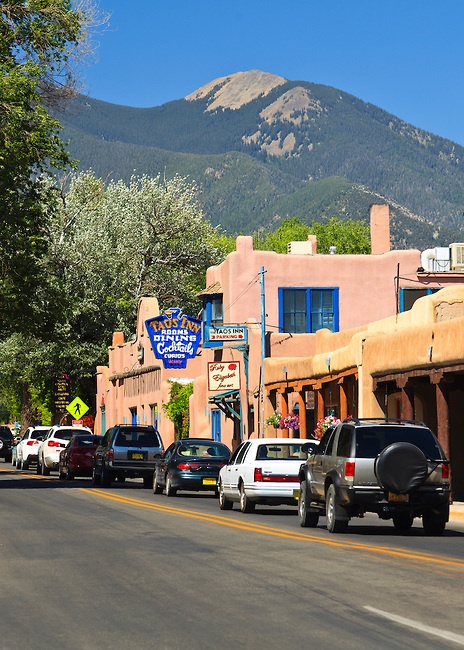 for over twenty years, and the place has changed plenty since. Downtownis still picturesque, although crowded, with rush hour traffic jams.  Now nasty residential and commercial sprawl pocks the outskirts of town, formerly the realmof elk.   But the lure 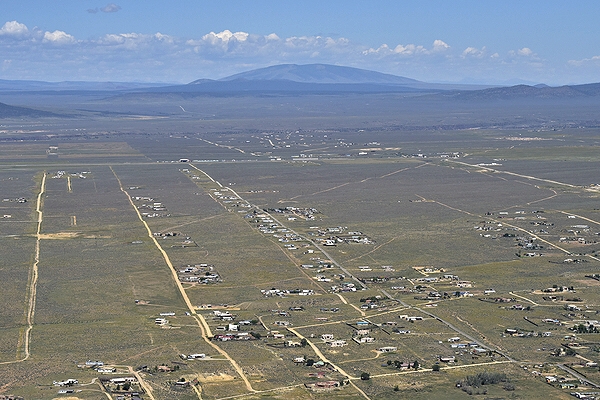 of fishing the mighty and pristine Rio Grande deep in a gorge just outside of Taos keeps me in a good frame of mind—the river looked positively entrancing as I pass over it on the Rio Grande Gorge Bridge on the way into Taos.

I set up my mobile fishing camp in the surprisingly quiet and bucolic Taos Valley RV Park, only 10 minutes from the downtown plaza, then head to the Taos Fly Shop just down the road, fly fishing central in this part of New Mexico.

The affable owner, Nick Streit, gives me a friendly welcome and shares the skinny on what flies are hot.  He recommends a double nymph rig—his local pattern called a Poundmeister in Size 6 (tied to represent a crane fly larvae) and a Size 18 red micro mayfly—both dangled below a big dry to serve mainly as a strike indicator, although Nick notes that there is still some hopper activity in the gorge so I might get surprised.

From the Colorado border to below Taos, there are over 30 miles of good water to choose from on the Rio Grande.  Where to go??  I tell Nick I am looking for some solitude as well as hungry fish and mention that I read some scuttlebutt online that a stretch of the river in the canyon reached via the Miners Trail is a good candidate (some guide books call it the Cedar Springs trail, but the Cedar Springs are on the other side of the river and there is no trail from there to the river).  Nick recalls his guides saying it’s been a little off lately, but I would probably have it to myself because of the steep hike in…but if I go, for the best fishing be sure to hike downstream a piece from where the trail intersects the river.  That will prove to be excellent advice.  I get a dozen of the various fly patterns he suggests, a copy of his father Taylor’s excellent book on New Mexico fishing, my license and with a few hours of daylight left, decide to scout out the Miners Trailhead.  Glad I did.The route to the trailhead is circuitous. From downtown Taos, I follow directions I find online in an article in the local paperabout hiking the Miners Trail.  I take Highway 522 north turning off left (west) on B-006, a good gravel road just before you get to the hamlet of Arroyo Hondo.

This takes me west down to the John Dunn Bridge across the Rio Grande.  The climb out of the gorge from the bridge is a rough road with tight switchbacks.  When I hit the rim, I drive another mile or so until I see a sign on the right indicating the Colorado State Line is 34 miles to the north, turn there and proceed about another 1.5 miles till the road forks just beyond the last house.  The fork to the right is TP (Taos Plateau) 219, but the sign has been torn off the post.  Keeping the faith, I turn and in a half mile or so I see a sign that has survived the vandals.  From the fork it is about 2.5 miles to the trailhead.  The road becomes progressively rougher and heavily rutted in spots—I wouldn’t want to navigate it when muddy.  A high-clearance vehicle can make the trip, but leave the family car at home.  My Xterra SUV has no problem, but after hitting a couple of deep potholes that rattle my teeth, I slow to a steady 10 mph. 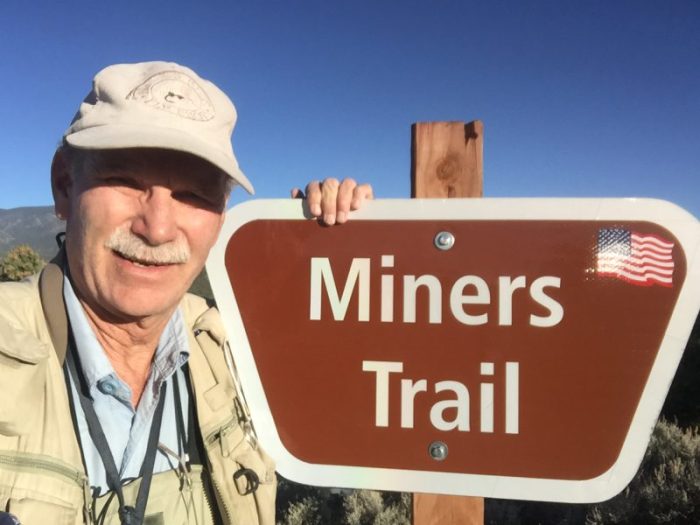 The sun is setting as I find the trailhead and peer down into the canyon.  It’s a fairly short, if steep trail, only a little over a mile one-way. The trail is rocky but decently maintained, so I make a decision to hike in the next day wearing my waders and fishing vest.  Then I head back to my trailer to rig up and get an early start. 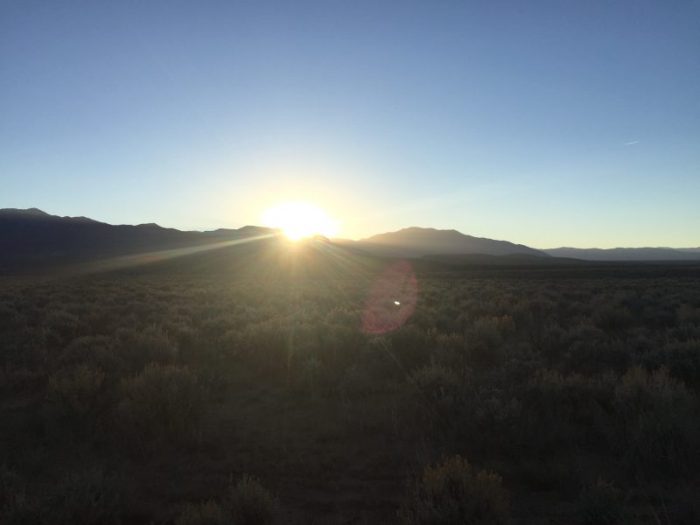 from camp in Taos to get to the trailhead.  I suit up and head down at 8:00 a.m.  The trail is well-maintained for the most part, although there are lots of loose rocks and 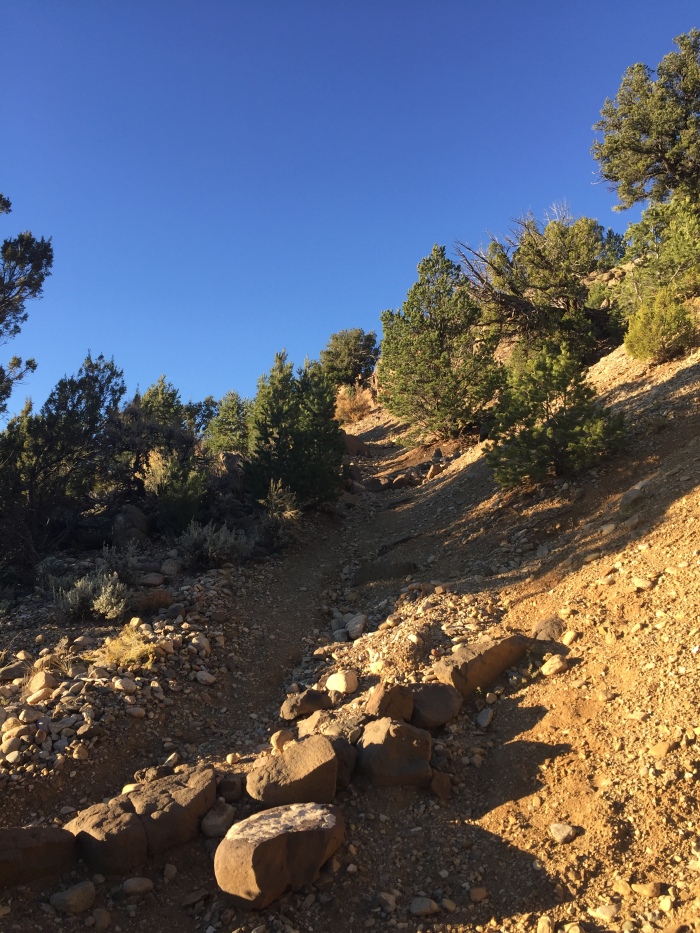 gravel in places.  It has some steep sections, so I’m happy I took my hiking pole to slow the descent, especially with felt-soled wading boots on.  In 30 minutes I decide to take a cut off the main trail that heads southeast towards a white sandy-looking beach I can see on the river below.  A few minutes later I rig up my rod and stow my lunch 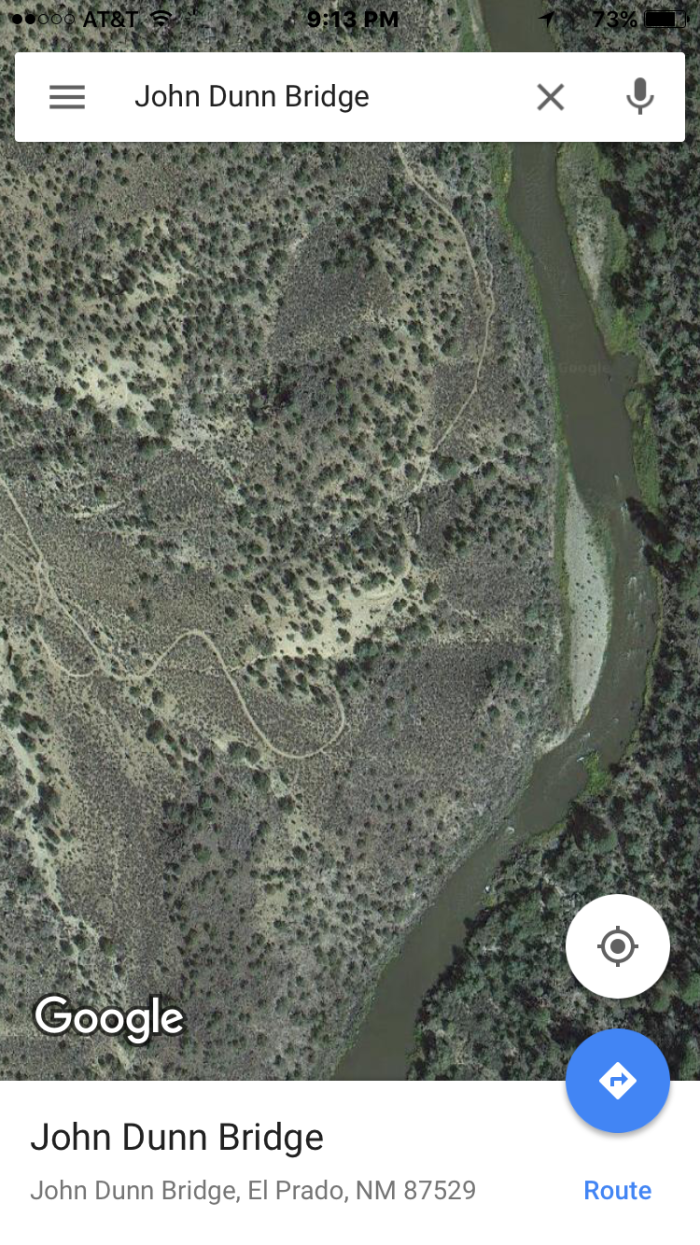 and gear underneath a scraggly piñon tree, then start the scamper downstream.  The water is low, so I decide to wade across and walk the east bank that looks more open.  Later I’ll discover there is a better trail on the west bank, with fewer big boulders to scramble over and brush to whack through, although the fishing seems to be better on the east side that appears to get less pressure.  The boulders here are distinctive—big black volcanic rocks that can be slick and require careful navigating.

I work downstream about a mile, scoping out the pools and making a few casts.  I check under some rocks in the current and then are crawling with mayflies and some caddis too, but no crane fly larva.  All those mayfly nymphs are a good sign—fertile water.  I see a few small dinks rising, and a couple are bold enough to slurp at my #14 Royal Coachman Trude dry, but I get nothing on either the Poundmeister or micromay.  The water is thin in places, and the heavy Poundmeister keeps hanging up.  I’m just about ready to switch flies when I am startled to see another fisherman in the next pool downstream.  Darn….thought I’d have the place to myself!!  Luckily, he’s a friendly local angler by the name of Arnold who invites me to fish along with 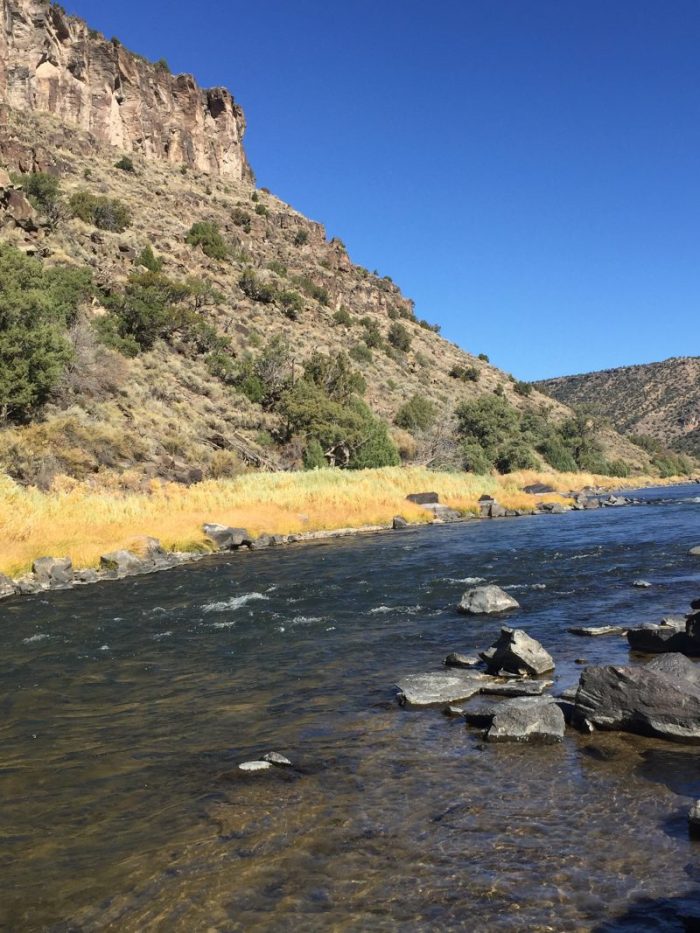 him and his spaniel Chewy.  He’s already caught a couple of pan-size browns on streamers, and suggests I try a nymph with orange or red on it that was the ticket when he was down here a month earlier.  I take his advice and find a #12 orange stonefly in my box and use that as the top nymph with the red micromay below.  I move upstream to the next pool just as the sun finally hits the water, make short cast in a likely looking run midstream and WHAM, something hits.  Then something else.  I am on to a double!!  The two small brownies—both only about 10 inches–come in reluctantly as I laugh as the scene of one pulling one way and the other the other.  Not a bad start, with kudos to Arnold. 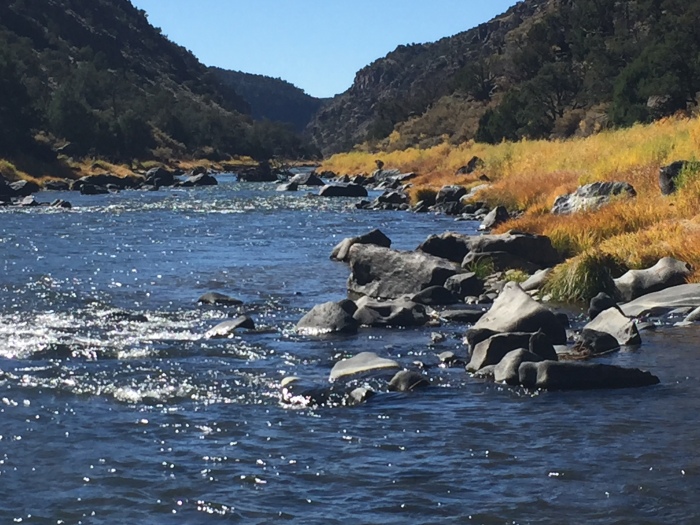 The action is steady for the next hour, including several dinks on the Royal Trude.  Then a baetis mayfly hatch starts up and suddenly there are small trout rising everywhere.  The bigger ones, however, key on the nymphs, often in very shallow riffles.  I also find that a good technique is to let the flies drift below me then let the nymphs swing downstream as if I were fishing a streamer.  Many times I am rewarded with a solid hit just as I begin to retrieve the drowned dry fly and trailing nymphs.  Most of the fish are small—8-10 inches—with a few 12 inchers mixed in.  Browns

outnumber rainbows about 4:1.  The action is split between the two nymphs.  The pace is fast and furious till noon, when the hatch starts to wane, then steady after that.  Most of the fish I get in the afternoon are on the red micromay, but two of the three 14-inch browns I hook are coaxed by the Royal Coachman Trude dry—not surprising because as it warms I see more

hoppers in the high grass along the river. I miss one good rainbow, and Arnold fools one that goes 16 inches on a big hare’s ear with a red collar.  That big one comes out of a deep hole, but most fish we catch are in depressions in shallow riffles, on the edge of medium-deep runs, and in small plunge pools at the foot of rapids.  Indeed, those plunge pools produce all the bigger brownies that I catch plus several I hooked and lost.

It’s 3 p.m. and now I am debating whether to follow Arnold who has already disappeared downstream or head back up to my lunch.  The answer comes quickly when I try step around a big boulder just offshore, feeling for the bottom on the other side that eludes me, and take an ignominious slow-motion fall backwards into the 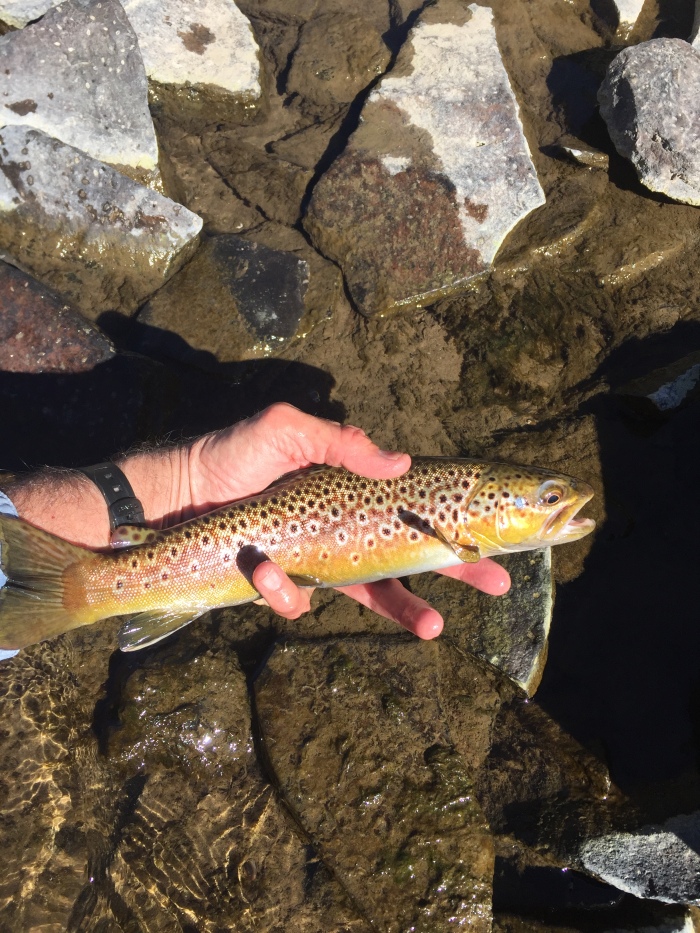 river, just deep enough to fill up my waders.  AARGHH!!  My first dunking of the year on the last day of trout fishing this season.  With water cooling me from the waist down to my toes, I work back upstream and salve my hurt feelings with another half dozen or so trout, one that goes 14 inches from what I dub the Ponderosa Pool.

Now I am back at my gear stash at 4:30 p.m., and the sun is just starting to dip below the canyon rim.  The fishing has turned off, so I decide I’d better start the steep climb back out if I want to beat the dark.  I head up the slope, doing a little bushwhacking, and intercept the cut-off trail.  Then it’s a steady climb up and up, but I surprise myself by humping back to the waiting SUV in 40 minutes. 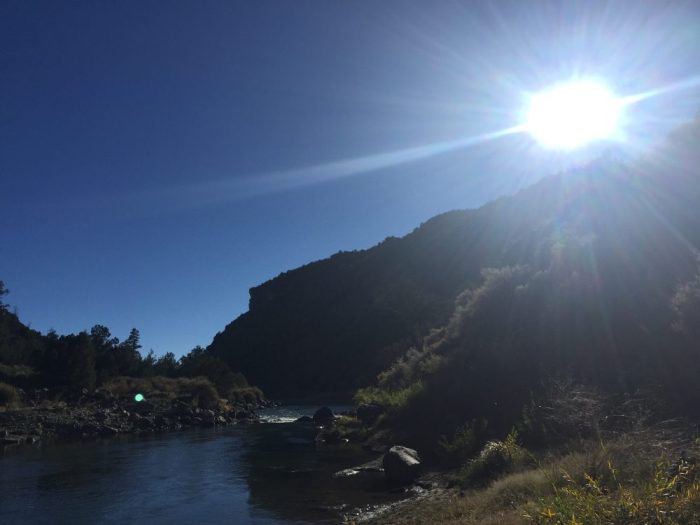 Maybe it was the NA beer waiting in the cooler that accelerated the pace.  Anyway, not too shabby for an AARP member!  I take one last look at this beautiful river below, tip my hat, then head for Taos and a good Mexican dinner.  Not a bad way to celebrate another fantastic season of the trout.

3 thoughts on “The Gorgeous Gorge of The Rio Grande–Near Taos, New Mexico”