Note:  Please read this article in tandem with my Dec. 6 blog on late fall fishing in Colorado that discusses gear, tackle, and techniques in greater detail. Also, Upper Grape Creek is featured in my earlier Nov. 8, 2017, article.

I am a big fan of Upper Grape Creek near Westcliffe, Colorado—it’s a beautiful stream tucked away in a rugged, remote canyon.   (See my blog article from November 8, 2017, Going Ape On Grape Creek.) Now as the weather is cooling rapidly, and snow has already descended on Upper Grape, I am wondering how the creek fishes farther downstream in Temple Canyon where the elevation is a couple of thousand feet lower.  Despite its proximity to the small city of Cañon City, Lower Grape Creek is also in a BLM wilderness study area.

Although the primary access in Temple Canyon Park is only about an hour from my summer home base in Salida, I avoid the waters around Cañon City that time of year when the temperatures can soar into the 100s, not to mention the territory is overrun with rattlers.  No thank you!  But come late fall I am hoping for better conditions.  I do some recon in mid-November, and I like what I see, so a couple of weeks later when the weatherman predicts temperatures in the upper 60s, I am on the road to Lower Grape Creek.

It’s  8:30 a.m. as I travel down US 50.  At Cotopaxi I have to hit the brakes for herd of Bighorn Sheep that are lollygagging right in the middle of the roaf, licking salt off the pavement.  Then it’s on to Parkdale where I turn south on Fremont County Road 3, just before the highway crosses the Arkansas River as it begins its plunge into the Royal Gorge.  (That’s also the best route coming from the east rather than taking First Street out of Cañon City and hooking up with the other end of Fremont County 3, which is a very rough road barely suitable in places for passenger cars.)  I travel 3.6 miles on FC 3 through beautiful Webster Park, then continue south on a good gravel road, past the telltale charred trees of the massive 2013 Royal Gorge fire, for another 3.6 miles to the creek access point.

On the way, I pass the sign welcoming me to Cañon City’s Temple Canyon Park then start a short, circuitous descent into the canyon, cross the bridge, and park in the well-marked lot with restrooms on the south side of the creek.  I am delighted the lot is empty—looks like even though it’s a weekend, I may have the place to myself.

This is the only road access point to the creek between Bear Gulch about 8 miles upstream and Cañon City.  It’s all thanks to some wise city leaders who created this park in the early 1900s, in contrast to some current politicians who seem intent on closing off our public lands from the average citizen and letting the big corporations run amok. Not only is the canyon breathtakingly scenic, it’s also loaded with history.  Explorers Zebulon Pike and later John Fremont made the incredibly tough trek up Grape Creek in the early and mid-1800s, and the canyon was a thoroughfare for Ute Indians and miners trying to reach the Wet Mountain Valley. 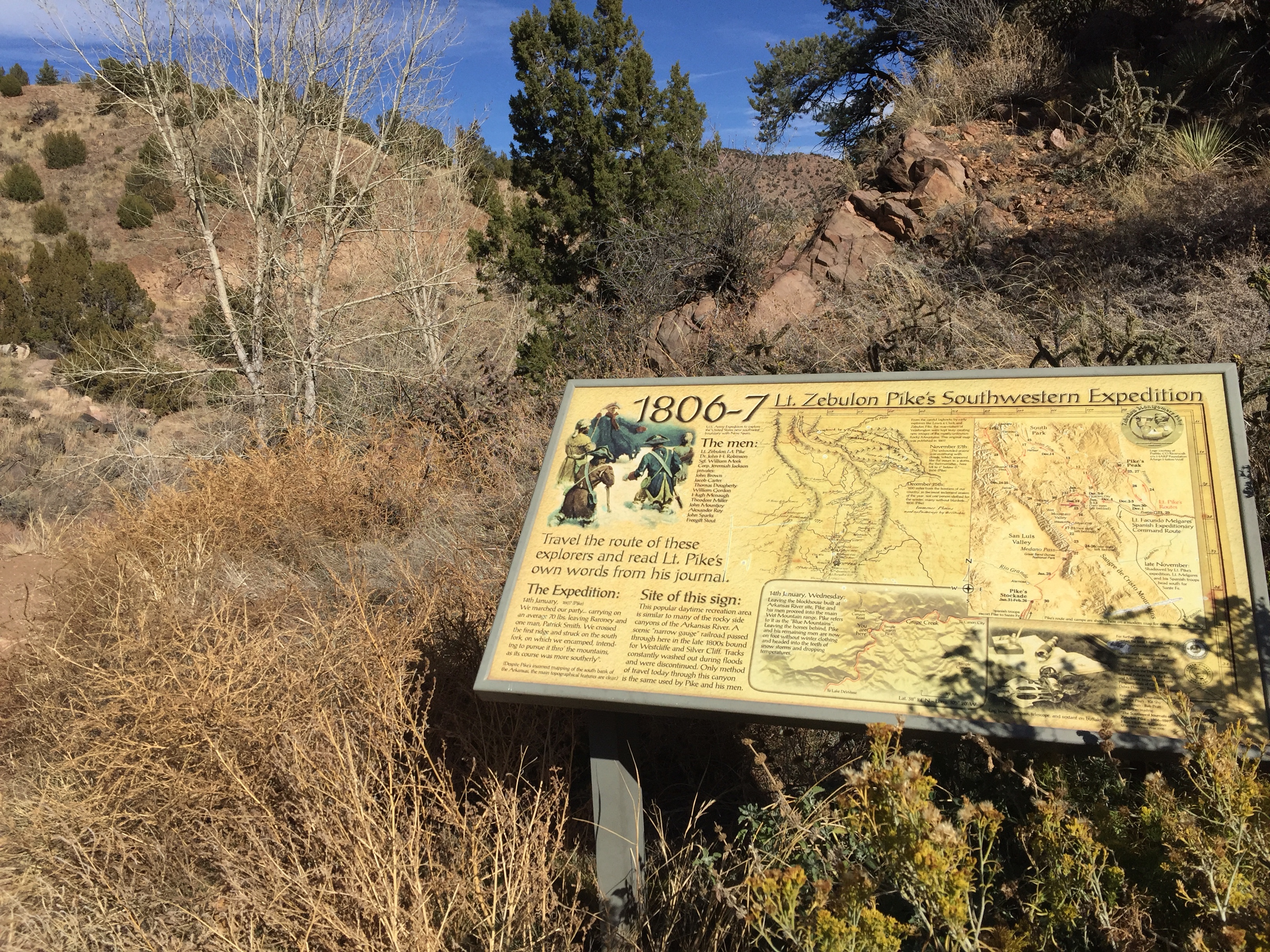 A good read is Dan Grenard’s web site article on Temple Canyon.  According to Grenard, when early miners and entrepreneurs wanted to connect to the booming mines in the Wet Mountain Valley and started to build a narrow gauge line up the rugged canyon in the 1880s, they discovered a natural amphitheater that was originally cloaked in vines. Grenard writes that “This amphitheater would come to be known as a temple and the area became Temple Canyon.  The canyon was a popular destination in the 1890s with residents traveling up Grape Creek by foot.”

Kudos to those old timers, as in 1912 they persuaded Congress to grant Temple Canyon to the city.  It remains an unspoiled wilderness to this day.  You can still see, and indeed will be hiking off and on, along the incredible remains of the narrow gauge line high above the creek that only survived a few years and then was abandoned around 1888 because of washouts and rockslides.

I suit up quickly in my neoprene waders and shuffle over to the bridge for a look…and I like what I see.  Two weeks ago when I was doing my reconnaissance here, the State of Colorado creek gauge upstream at Westcliffe stood at 25 cfs, which is optimal, but the creek is still fishable running lower now at about 17cfs. (Google Colorado Water Talk and then select the Arkansas River drainage for current readings.)

Then it’s off south along the trail high above the creek on its east side.  I resist the urge to fish the good-looking pools down below, knowing that they get hit hard and I spotted some good fish in pools further upstream a half-mile or so.  Soon I come to a green gate and fence across the trail.

I open the gate and proceed through a very short stretch of what is said to be private property (although there are no signs), making sure to stay on the trail and leave no trash behind.  The trail splits, and I know to take the lower section that soon will take me down to the first creek crossing.  Then I have a choice.  I can scoot up the slope and catch the trail that follows the old railroad grade high above the creek, or start to work upstream close to the creek, alternately wading or following a faint path along the south and west banks.

There are some deep, productive pools in this stretch that are hard to access if you opt to cross the creek and resume on the old railroad grade high above.  I stay low and head for a big pool that I spotted two weeks ago that was loaded with fish.

I creep up slowly from below and see that something has changed….beaver have dammed up the creek and change the water levels.  And AARRGGHH, they have filled in the deepest, best part of the pool with branches that will serve as their winter lunch counter.  I see some big shadows lurking under the branches, but casting to them is impossible.  So I wade carefully around the edge of the pool and throw a cast above the branches where the creek cascades in.  I watch the Royal Coachman Trude ride the current into the pool and float towards me, then suddenly disappear.  I set the hook and feel something pulling hard.  Must be a rainbow trout? He dives for the branches, but I managed to winch him away and soon have him at the net—a muscular, colorful 13-incher that took a liking to the Size 16 beadhead green hotwire caddis nymph. Good start!  Two more smaller fish follow, both on the nymph, then the pool goes quiet.  Three fish by 10 a.m….not bad.

I continue working upstream, picking up a couple of nice brownies on the nymph.  As I unhook one, I hear something above.  Bighorn?  Cat?  Dang, it’s a couple of young anglers heading upstream high above me on the trail.  They wave.  I grit my teeth and wave back.  Now I’ll have to play hopscotch with them and share the water.  That’s why I always try to avoid weekends on these small creeks.  C’est la vie.

I continue up this canyon stretch, seeing nary a boot mark anywhere, being careful to avoid the sharp needles of the abundant Cholla cactus.

I️ come to another deep pool and what to my wondering eyes should appear but a big school of rainbow trout fining in the depths, oblivious to me.  I cast…and cast…and cast, running my nymph right through the crowd.  They move and seem to show interest, but no hits.  I move in for a closer look and discover it’s a big group of suckers, carp-like fish that won’t eat flies usually.  Finally they have had enough of my presence, and I have to laugh as they flash by me en masse, headed downstream in a frenzy.  I don’t feel completely like a fool, because I know that sometimes trout mingle with them, picking up tidbits kicked up from the bottom by the suckers.

Just upstream I run into a very intriguing pool.  The creek tumbles down a rocky run then plunges into a deep seemingly bottomless pool against a big boulder.  Looks fishy.  I execute a back-handed cast and gently loft my flies around a rock to the head of the pool and let them drift slowly through the dark swirling water.  No dice.  Three casts later I am about to move on when I see a flash below the dry and the fly is jerked back hard.  I strike and am onto a big fish.

He bores for the bottom then shoots to the undercut ledge beneath the boulder.  For a second I think he’s snagged, but slowly I am able to extricate him from the rocks and branches at the bottom of the pool.  What a prize—a glistening rainbow that goes 15 inches, a big one for any small creek!

I continue upstream, resisting the urge to rejoin the trail and stick to the creek, which pays off.  I catch another stout 13-inch rainbow on the dry, then several smaller browns on the nymph.  This is a good strategy all the way up the creek—try to access the pools that are far below the trail.

As I emerge from the canyon and continue up the trail, I see the angling duo just ahead of me where the trail  crosses the creek for the fourth time. They are a  couple of amiable young chaps from Colorado Springs who seem to know what they are doing.  I watch one pull a couple of small brownies from the pool above the crossing.  We exchange greetings and tales of the fish we have caught…and I get to brag a little about my big rainbow.  We agree that we will continue upstream, hopscotching around each other.  I walk up several hundred yards and find another alluring pool that quickly yields several browns on the nymph and a 13-bow on the dry.

Then I cross paths with the Colorado Springs contingent, and we all decide to take a break for lunch.  Derrick and Sean are two knowledgeable gents who have also had a good day.  I decide to fish upstream with them one more pool, and they put on quite a show.  Derrick catches five trout on a Size 16 Red Copper John then his buddy gets another three—a mixed bag of brownies and bows.

It’s pushing 1:30 p.m. now and the sun will be down in a couple of hours.  It’s two miles back to the SUV, and I want to hit a couple of stretches downstream on the way back, so I head that way as Derrick and Sean press on upstream.  I manage a few more small browns and a good bow on the return, but as the sun sinks the fishing slows.

By 3:30 p.m. I am back at the trailhead enjoying a cold NA beer.  It’s been a great day—beautiful weather, and the predicted big winds didn’t materialize which is often the case in these sheltering canyons.  I contemplate how much more water there is to fish upstream—I hiked in about two miles and there’s another six to Bear Gulch.  And that’s not to mention the several miles downstream of the bridge through Temple Canyon and the Ecology Park outside Canon City.  So much water….so little time as winter approaches.  But you can bet I’ll be back in December if we get another warm spell!