I am always on the lookout for a new, scenic, out-of-the-way creek overlooked and rarely visited by other anglers, where there is solitude and hungry fish.  But sometimes the little gems are hiding in plain sight.  That’s the case with the upper reaches of Tomichi Creek, just over Monarch Pass from my cabin near Salida, Colorado.  I have hustled by the creek many times on the way to fish fabled waters like the Gunnison River or my favorite backcountry streams like Cochetopa Creek.  As you come bombing down the twisty, turny U.S. 50 from one of the highest paved vehicle passes in the USA, you descend into a lovely valley where gorgeous little Tomichi Creek flows through private ranchland–visible and within a stone’s throw of this major highway.  But awhile back on my way to Cochetopa Creek, I noticed a sign on a fence along the highway declaring special access, so I turned around and took a look.  I was surprised to find that the Colorado State Land Board owns a full section along the road called Daley Gulch near the hamlet of Sargents, and it was open to fishing.  I tucked away that information till a year later when I was hankering for a mid-week trout fix but had to be back home for a conference call by 4 p.m.  Oh those pesky clients!  I figured if I left early and was on the water by 8:30 a.m. I could fish till 1 or 2 p.m. and make it back to the office with ease.  Now this was admittedly a long shot–a little like the Trifectas and Daily Doubles I used to bet on at Arlington Park in Chicago.  The creek is very small as it flows through Daley Gulch, and with public access so close to a major highway I expected it probably got plenty of pressure.  But with high hopes, that evening I rigged two rods, got the waders and boots out, set the alarm, and hit the rack with chubby trout dancing in my head.

After a good half-day of angling for scrappy brown trout in the canyon stretch of Tomichi Creek below Sargents, Colorado, I decide to drive up to the headwards—about 9 miles north of the town.  The colorfully named U.S. Forest Service Snowblind Campground is my destination for a late lunch before I explore the upper reaches of the creek.

The turnoff for County Road 888 is just over a mile north of Sargents off of U.S. 50.  Then it’s a scenic drive through the Cross Bar Ranch, a well-tended working spread.  I nearly bump into a momma cow and her calf as I salivate over the picturesque creek wending its way through the valley.

The ranch is reportedly owned by a millionaire businessman out of Miami, and there is no fishing access for the public until you reach the campground, about nine miles from the U.S. 50 turnoff.

The pavement ends about three miles up followed by six miles of a decent gravel road.  The county road crosses Tomichi Creek just before it reaches the campground.  Up here at about 9,000 feet elevation, it is rollicking little mountain freestone water, with canyon walls starting to pinch in and spruce and pines covering the slopes.

The campground is a so-called “primitive” one because it has only vault toilets and water.  No 50 amp hookups for those roughing it in 40-foot RVs!  But a nice little travel trailer or tent would be just perfect in this well-laid out facility.  The bonus is that Tomichi Creek runs right through the middle.  There were plenty of open sites this day, so I got get one right next to the creek for my lunch break.

Very relaxing and just what I needed after the ordeal of having to land all those fish earlier in the day.

After lunch I reconnoiter upstream.  A mile or so up the road I pass the well-tended White Pine cemetery then in another mile the former ghost town of White Pine, now a little village of summer homes.

There is a lot of history up here, mostly related to mining.  Silver was discovered in 1878, and a boom let to the creation of White Pine, named for the dense stands of pine on the surrounding slopes.  The boom peaked in 1884 when the town had almost 1,000 people, a newspaper, three saloons and several hotels.

It’s hard to imagine all that development shoehorned into this cramped valley.  Indeed the tough topography made building a challenge and transportation in and out a travail , not to mention deadly avalanches.  When the Silver Panic hit in 1893, White Pine soon became a ghost down.  There was a revival in the early 1900s when the Akron Mining Company drove an almost mile-long tunnel into nearby Lake Hill and pulled out coal and zinc.  The mine continued in operation until the 1950s, supplying critical metals like zinc, lead, and copper in two World Wars.  When the mine closed, White Pine again faded.

Of course what got left behind was a legacy of pollution and scars upon the land, a story repeated throughout Colorado and the West.  Toxic sediment from a huge pile of waste rock and mine tailings  that abutted the creek near White Pine for years damaged the trout population in the Tomichi.  Downstream the Tomichi Mill site on the stream was also heavily polluted.

The fish—browns and brookies—were still there, somehow managing to survive, but the long-term future of any aquatic life in the upper Tomichi was dim.  That is until the U.S. Forest Service and U.S. EPA teamed with other agencies and Colorado Trout Unlimited in 2015 to clean things up.  This award-winning $1.5 million major earth-moving and remediation project, has recently been successfully completed and things are looking up and the results are promising.  The photos below depict the heavy earth moving required and before and after conditions.  (These project photos are from an excellent 2017 article on the remediation efforts by Jason Willis, the Trout Unlimited project manager, available on-line.). 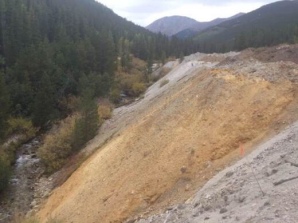 Not that things are completely hunky dory.  When I start to explore a promising stretch of the creek below White Pine, I find very few bugs in the water—almost no mayfly nymphs and a few caddis nymphs here and there.  Further downstream around Sargents the predominant bug is still the caddis which can withstand pollution better than mayflies, indicating that heavy metal pollutants are likely still present courtesy of the upstream mines.  But the fish are there in the headwaters, as witnessed by electroshocking done prior to the remediation project.

This is no stream for beginners, especially between the campground and White Pine.  Rarely will you flip a cast longer than the length of your leader.  The creek is mostly fast-moving water with tiny pockets where the fish hide.

My first little brownie flashed out lickety-split to nail my #16 Royal Coachman Trude, but any bushy high-floater will do.  I also get one on a small #18 green hotwire caddis nymph trailing a foot under the dry—any longer dropper will just result in more snags in the willows and assorted trees and brush crowding the creek.

You will get snagged and probably break off a fly or two, and you will be tempted to scream epithets, but it is still fun.  And just remember there are some sizable brownies that rarely see a fly hiding underneath the thicket.  Did I mention there are also several miles of beaver ponds on Tomichi Creek above White Pine that I have yet to explore….let me know how you do!