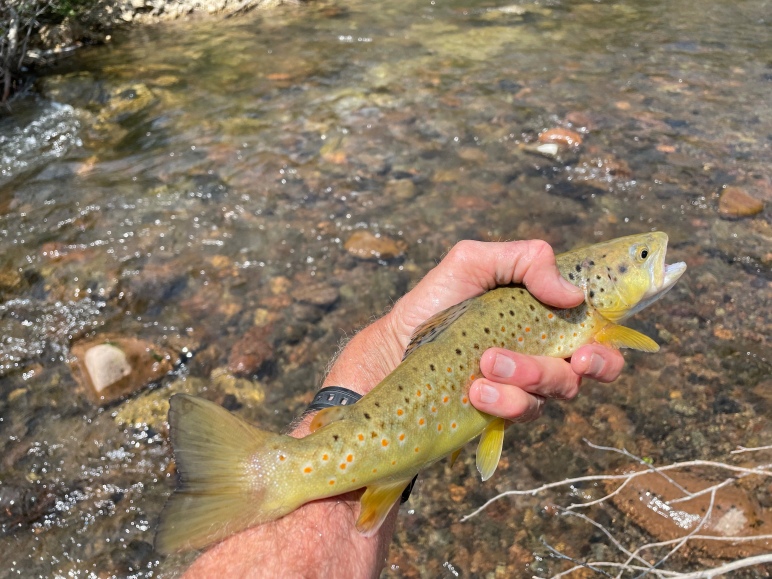 Shaman:  A person regarded as having access to, and influence in,

the world of spirits, including angling.

To read about my mid-August reconnaissance trip on the upper Chama, see: https://hooknfly.com/2021/08/10/in-the-footsteps-of-the-rio-chama-shaman-near-chama-nm/

A few years back I was in Taos getting ready to chase some trout in the nearby Rio Grande Gorge.  I stopped into the well-appointed local fly shop and got the skinny on the best flies and techniques for my trek from the amiable proprietor Nick Streit (rhymes with “bright”).  In the course of our discussion, Nick mentioned I might want to take a look at a book on New Mexico fishing by his father, Taylor Streit, widely recognized as the leading fly fishing guide in New Mexico.  Sure glad I did.  The book is a wealth of practical knowledge and savvy only years of on-the-water experience can bring, all wrapped in Streit’s engaging personal writing style.  No wonder he was unanimously elected to the prestigious guides’ hall of fame.

This summer as I was preparing for my annual trip to fish the Conejos River country west of Antonito in southern Colorado, and thinking about new waters to explore, I remembered Streit had sung the praises of the Chama River, one of his favorites, just a short hour’s drive over the New Mexico border from the RV campground where I would be using as my fishing camp.  As reread the Chama River section, I realized I had somehow missed the fact that the remote headwaters of the Chama, a medium-sized river, were actually in Colorado.  To stoke my fishing fever even more, Streit writes glowingly about the prospects for anglers willing to hike in.  I thought it would be satisfying to follow in the steps of the Shaman of the Chama River after experiencing it through his eyes.  Fortunately by mid-August when I am ready to leave, the rivers and streams in the Antonito/Chama area, which had been suffering a severe two-year drought, are back to decent levels thanks to monsoon rains in July.  All systems are go!

I had done a half-day reconnaissance in mid-August on the upper Chama to get the lay of the land and as a bonus had good results for some nice brown trout, but only after tangling with the wicked thicket—a heavily overgrown stretch of bushes I had to navigate on foot to get to the river.  I vowed to return, albeit by an easier access route. (See link above for article on the recon trip.)

I’m on the road at 7:30 from my campground near Antonito.  Colorado 17 is a good paved and scenic road that crosses the mountains to Chama, New Mexico.  It’s a twisty paved highway that also crosses the narrow gauge Cumbres Toltec tourist train tracks several times, so I don’t hurry, instead enjoying the scenery.  I also know to keep an eye out for roving bovines—this is open range country.  Several times I am forced to come to a complete stop as cows and their calves wander nonchalantly into the middle of the highway.  When I honk they stare blankly at me.  As I can attest as a former Kansas farmboy, they are not exactly Roads Scholars.

In about 45 minutes I’m at the turnoff to Forest Service 121, a good gravel road that snakes five miles north through private property up the scenic Chama River Valley. In about three miles I cross the boundary back into Colorado then at five miles enter the Rio Grande National Forest.

I know from my recon trip to drive another couple of miles till I arrive at a turnout by the trailhead, marked by an old closed road that leads down a steep incline and emerges on the east side of the valley below.

However, I know if I take that path I’ll have to bushwhack through the nefarious thicket to get to the river on the other side of the valley. But I’ve done some scouting on Google Maps and see that south of the thicket is a meadow that will provide easier access to the river a quarter mile away on the west side of the valley.  As I walk towards the old closed road path, I happen to spy a faint, rough trail that angles to the south.  It’s steep and appears to have some fallen trees across it further down, but what do I have to lose?

Luckily the trail is short and emerges in a beautiful grove of aspen that overlook the meadow I spied on Google Maps.  Triumphantly, I thumb my nose at the thicket just to the north and proceed to amble leisurely across the meadow, soaking in the great views of the mountains.

In ten minutes I’m entering a big grove of spruce where I follow a wildlife/cattle path, cross the river, and intersect the well-defined trail used by outfitters and hikers a few hundred yards west of the creek.

I have decided ahead of time I will hike up a mile or so to what I call the third meadow—a big open expanse along the river.  It’s a beautiful day, with highs predicted to be the upper 70s, with plenty of sunshine and light winds.  In a half hour, I emerged from a stand of trees that shade the trail and start to cut down to the river which is running low—about 15-20 cfs—and clear.

As I do, I hear something behind me and turn to see a cowboy leading three horses with his three canine companions bringing up the rear.  We stop to talk.

I ask him if he’s setting up a hunting camp upstream, but he says no and explains he’s hauling salt blocks up to his cattle in the high country above.  His dogs are acting skittish, the result he tells me of being chased earlier on the trail by a big pack of coyotes.

After shooting the breeze a little more, he peels off to the west on the trail, and I head down the gentle slope to the river and begin to walk further upstream. Hoppers are jumping every which way in the warming sun. Like much of the Chama, the shoreline is overgrown so I have to do more bushwhacking.

In 15 minutes at about 10:30 a.m., I emerge relatively unscathed and find I have lucked out to surface just below an alluring pool below a big deadfall.  With a nice foam line along a stretch of dark green water under some overhanging branches, it wreaks of trout.

I tie on a #16 Wilcox to imitate the small hoppers I saw in the meadow and below it drop a #18 beadhead sparkle caddis larva.  As I prepare to cast, I see a couple of small brown trout finning at the lower end of the pool.  When I lift my rod to cast, they scurry to the head of the long pool.  Hoping they didn’t spook their big brothers, I go ahead with several casts at the lower end of the run.  Then I take aim at the top of the pool and am able to land the flies just above the overhanging branches.  They float along in the foam, close to the bank, then suddenly a big fish explodes on the Wilcox and the battle is on.

It’s a big brown, and he knows his territory, heading directly for a submerged snag along the bank.  For a second he’s tangled in the mess, then somehow comes free.  I lean hard on my four-weight wand, bending it in a perilous arc and slowly work him away from the snag.  Soon I have his head up and skidding towards my net, but when he sees his fate, the hooked-jaw brownie jets away.  We repeat the tussle, and this time I get his head into the net.  He’s a muscular 17-inch plus fish.  As I start to celebrate, he surprises me and rockets out of the net and heads straight for the snag.  This time he’s wrapped up tight, so I wade out into the flow on a rescue mission.  Amazingly, when I run my hand down the line, I can feel he is still on, whirling around in the depths!  They suddenly all goes limp.  He’s won his freedom!  I shuffle back to the opposite bank and sit down on a log to calm my frayed nerves and let my right arm that was submerged to the shoulder in the cold water thaw out.  After some dejected mumbling and checking my flies and knots, I make a few more casts in the pool, but clearly the big guy’s gyrations have warned off his buddies.

I continue upstream and scale the big downed tree that’s fallen across the river.  Just above the river bends, creating a deep, swirling pool.  I carefully cast in the rapids above and watch as the flies cascade down into the pool.  The Wilcox promptly disappears as something nails the caddis.  It’s another good one who puts up a battle before I can bring him to the surface and into the net.  Another colorful brownie that goes fourteen inches!  Now we’re cooking!

For the next half hour I work upstream with steady action for hungry brown trout.  Soon the brambles give wat to a forest of tall pines and spruce, and the river gathers more steam as the gradient increases.  It’s transitioned from a meadow water to more of a freestone one marked by boulders and plunge pools.   The good fishing continues, with several more 12 to 14-inch browns feasting on the Wilcox.  I miss a bigger one that is hiding under a big boulder.  I see his big nose poke out above the water as he snatches the dry, but only manage to prick him.

Now the river bends hard to the north and becomes even faster and rockier with less holding water, so I decide to head back downstream a half-mile to another meadow stretch and work upstream from there.  Again, I have to do some bushwhacking, then stumble on a dry finger of the river and follow it downstream.  I have to dance around some mud holes, but again am in luck and emerge just below a good-looking pool.  It yields a handsome 15-inch brown, again on the Wilcox.

It’s about 2 p.m. now, and after catching a few more, I break for lunch in a shady spot below another good run.

After recharging with victuals and my RC Cola energy drink, I have good steady action for another hour, catching and releasing a half dozen 10 to 14-inch fish.

By 3:30 the sun is getting ready to slip behind the big ridge to the west, so I decide to start back to my SUV.  Thirty minutes later I’m back near the spruce forest where I first crossed the river.  I can’t resist trying the honey hole where I hooked and lost a big brown trout on my recon trip a week ago.  This time I fool two small brownies on the caddis larva dropper, but the big boy is too wise to fall for my act again.

By 4:30 I’m back at my vehicle.  It’s been another mediocre day in paradise with perfect weather and thirty or more fish caught and released, with maybe a dozen over 14-inches.  I think the Shaman of the Chama is smiling!