The heavy rain continues in the Everglades in January, courtesy of El Niño.  Winter is usually the dry season here, when at times the Everglades actually burn just like a prairie.  And with the rain, comes a slug of freshwater pouring out of The Swamp, chasing the snook, redfish, tarpon and other of my favorite quarry–that seek refuge in the upcountry from cold temperatures–back into the Gulf and its saltwater.  So, I readjusted my sights and headed out into the Ten Thousand Islands, just offshore of my new home in Chokoloskee, to see if I can change my luck.  And boy, did I!  I set out on a falling tide looking at a beautiful sunrise, a harbinger of good things to come this day.  I am headin

g towards Sandfly Pass, about 3 miles away.  It’s one of the main routes out to the bluewater of the Gulf for power boats.  I’ll make a big loop to the south in my kayak then head back home when I intersect the pass, picking my way through the maze of mangrove islands.  It’s easy to get turned around out here, so I keep my chart and GPS handy.  Still

I get confused and temporarily lost, but that’s part of the adventure.  I am looking for narrow cuts between the islands where the flow concentrates edibles and also for oyster beds that abound here showing up on the GPS like ghostly serpentine fingers in the water.

These oyster beds are  magnets to gamefish like snook and redfish that chase little crabs, small fish, and other morsels that seek refuge among the razor sharp shells.  I have to be careful that I don’t get swept into a bar hiding just under the surface or my kayak will get a complimentary

plastic peel pronto, and I’ll have to get out and tiptoe through the armored critters.  As the tide falls and water over the bars thins, the fish I am after will often set up just on the downstream side of the bar, just to the side and out of the strong current, waiting for bait fish to be swept right to them.

I explore a narrow cut that appears to wend its way between two islands through a mangrove tunnel.  Fortunately, the mangroves haven’t closed off the passage way entirely, so I can snake through, batting down the orb weaver spider webs and ducking under clutching branches as I navigate.  When I emerge on the other end, I am rewarded with a double bonus–the current makes a big sweeping S curve around an oyster bed and then eddies out into a deep hole.  I cast up against the bed, just out of the current with my old reliable white curly tailed soft plastic minnow, crank the handle a couple of turns and WHAM!  Something slams it hard and starts dragging the kayak towards the mangrove roots, a sure death for my line if it gets tangle

d in there.  I horse back hard on the rod with my right hand while chucking my little anchor over the side with the other.  Quite an ambidextrous display for a senior citizen.  My rod bends double, but holds, and the big fish surfaces–it’s a 25-inch redfish, muscular and shining bronze.  After a good fight, he comes to the boat, poses for a quick picture, then swims off nonchalantly, looking for his next meal.  Great start to the day!!

I head for one of my secret honey holes where a small island splits the current and eddies into a deep hole,providing an ideal chow line.  It’s usually the haunt of some good-sized sea trout, and again does not disappoint.  I

catch a half dozen trout, including one that pushes 20 inches, a nice one in these waters.  I am halfway to what what’s called a grand slam–a redfish, trout, snook, and tarpon.  But I’ll settle for a poor man’s slam–substituting a ladyfish–a small-scale
cousin of the big tarpon that are a real prize around here.  The tarpon haven’t started to move in yet in any great numbers from the waters to the north or offshore.

So next I head for a spot that has often produced some big high-strutting, high-jumping ladies–up to two-feet long.

As I slide up behind an island and get ready to cast, I hear a loud whooshing, breathing sound.  It’s a family of dolphin slowly working their way towards me.  These are not the cute Disneyland Flippers, but voracious hunters that drive their quarry into shallow waters against the shoreline and then tear into them, often leaping and snatching panic-stricken mullet right of the air.  They swim within a few feet of me, two adults and a baby, porpoising as they swim in the current and studiously ignoring my presence.  I set ou 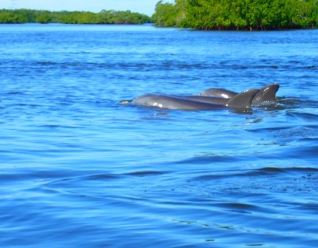 t after them and watch as they herd bait into a small bay and then feed ravenously.  They blast into the shallows–only a couple of feet deep– in pursuit of a meal, their backs clear out of water.  They can make 180 degree turns on a dime, churning the water into a brown geyser. What a bonus on this glorious day!!

I watch them for the better part of an hour, munching on a turkey pastrami sandwich and nibbling on some goat cheese.  My healthy fare is washed down with a cool RC Cola, an indulgence a person of my mature years can fit into a diet with few regrets.  Did I mention the almond mounds candy bar for dessert. They say that coconut is good for you!!

The dolphin finally swim off in search for more food, and I return to my quest for the Grand Slam.  Soon I add a

ladyfish to the tally, then it’s time to start heading back in.  I float down Sandfly Pass, the tide now ripping in, then detour to the east to pick my way around some small islands encircled by oyster bars.  As the tide washes up over the bars, the reds and snook follow, rooting around for an easy meal.  I put on a popping cork and drop a DOA plastic shrimp a few feet under it.  This is rig that doesn’t work in a lot of other places in Florida,

but here it is like a dinner bell.  I cast it out over one of the submerged oyster bars, then snap back hard on the rod to make the floating cork pop on the surface.  Apparently the sound attracts the fish, then they spot the artificial shrimp.  And sure enough, a few casts later a good 22″ snook swipes at the shrimp and completes the grand slam!  I muse over my bragging rights that I will exercise back at the dock as the sun sets behind me.