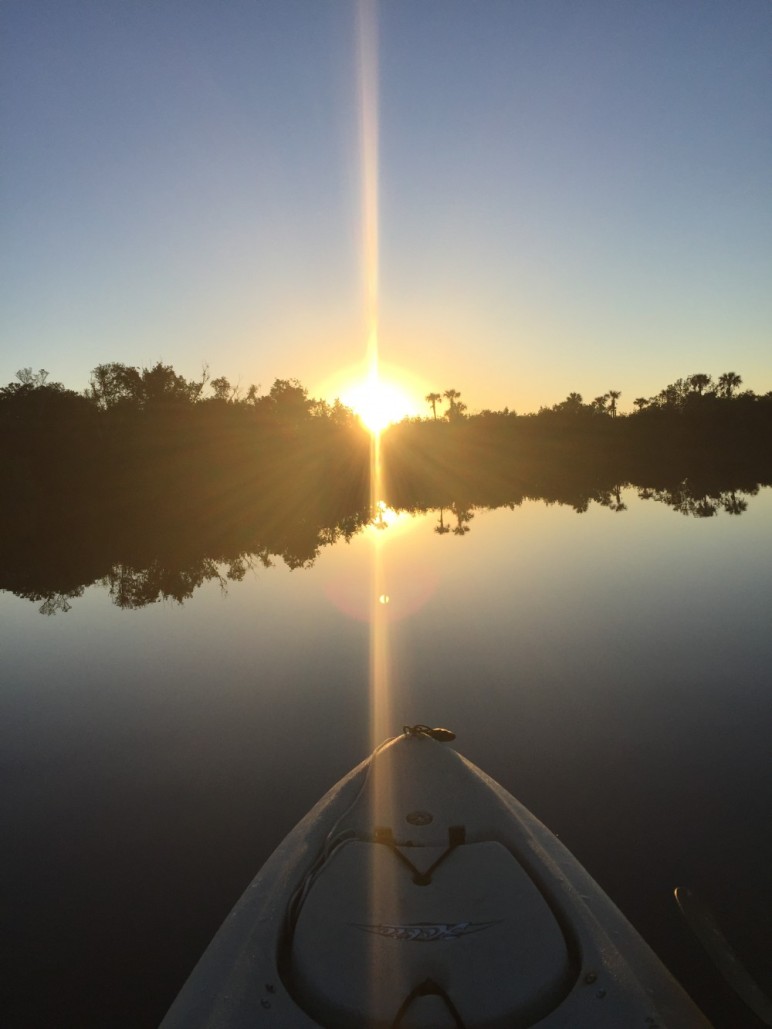 Hope Is Such A Bait, It Covers Any Hook–Oliver Goldsmith

One of the most odious words in the lexicon of anglers is “SKUNKED!”  It means you fished all day and didn’t catch, let alone release, anything.  I have had several of those near-death experiences this past few weeks as the torrent of freshwater from the Everglades–due to rains of near-biblical proportions in January–have pushed my saltwater quarry out of the backcountry and into the Gulf.  And even there they have been tough to find.  While snook will tolerate freshwater somewhat, redfish, sea trout, jacks, tarpon, and others don’t fancy the taste.

This past Friday was a perfect example.  We have had sunny, dry weather for over a week.  I thought by ch

ance the freshwater flows might be subsiding, and the snook and reds would be heading for the

warmer water in the backcountry.  Hope springing eternal, I put in on my favorite Halfway Creek in the Big Cypress Preserve at 6:30 a.m. and was greeted by a family of manatees rolling and feeding at first light, a couple of young ones boldly swimming right under the kayak as I held my breath they wouldn’t flip me.

Then 15 minutes later, a spectacular sunrise greeted me as I crossed the first in a series of small lakes along the

creek.  Next a big dolphin hunting in the shallows surprised me, then a little gator way down further than I usually see them, a testament to the freshwater surge.  He was good enough to pose for a close-up before scurrying into the mangroves.  But by noontime when I had had only one half-hearted bite, my ardor was waning as the specter of a skunk loomed larger.  To make matters worse, I was seeing only a few forage fish in the crystal clear waters of the creek, and no snook at all.

So I headed further downstream–a long excursion–to a shallow lake that often produced.  On the way, as I

navigated through a tight mangrove tunnel, I was treated to a close-up view of a shy Yellow-

Crowned Night Heron.  What an exotic beauty, the first I had seen in the wilds.  30 minutes later, I turned up a side channel that leads to the no-name lake, which on my GPS satellite view looks to me a lot like the Charlie Brown cartoon character Snoopy, so I have christened it Snoopy Lake.  And true to form, on the first cast it produced–a light strike.  My nerves rattled, I cast again and hooked something small.  As I brought it in, I saw it was a tiny six-inch needlefish, which snook like to eat.  But he wriggled off.  Now surely I was resigned to the ignominious skunk!

As I circled back around the lake to the inlet and journey home, I kept casting, enjoying the warm sun and praying silently for a hungry, albeit small needlefish with eyes bigger than his stomach to end my travails.  I saw a little school of them swirling 50 feet in front of the boat and plunked a cast right in their midst.  When the water erupted in a gusher, and a big snook

came rocketing into the air, needless to say I was momentarily paralyzed.  She took off like a jet towards the other side of the lake as the drag on my reel, which was too tight, sizzled and screamed.  I let out a loud plaintiff “Noooooo,” fully expecting my line to snap.  Somehow it held, and she reversed course and ran back towards the mangroves.  I fumbled to throw my little anchor overboard to stop the fish from dragging me in with her, and pulled back hard on the rod, doubling it over,  Luckily, it turned the snook without snapping, and after another minute of frothing around the boat, she was mine–a 25-inch beauty.  A quick picture, and she shot back to her hiding place.

That would be my only fish of the day, but the unspeakable “skunk” had been avoided to my great relief.  As I paddled back towards the put in, a big water snake came slithering out towards me, something oddly enough quite unusual to see in the backcountry.  It was beautiful to watch the sinuous swimming technique of this reptile, who didn’t take kindly to my attempts to get a good photo, giving me a withering glare that rivaled that of my high school English teacher Miss Pankratz when she caught you chewing gum in her class.

As I continued towards the SUV and the waiting libations, I didn’t even sniff another fish, but was treated to some of

the first blooming cardinal air plants of the season, one of my favorites.  These epiphytes,

which get all their nutrition and water from the air, not the soil, unfold with vibrant red and purple flowers, splashing the green mangroves with brilliant colors in March and April.  They are prolific in this unspoiled environment, anchoring themselves on dead mangroves along the creek.  As I snapped some pictures, it dawned on me that sometimes these fishing trips with their skimpy results actually turn into fabulous ecotours, offering glimpses of nature few get to see.  I felt a little bit like Marlin Perkins of the Wild Kingdom TV show fame (OK, now I am really dating myself).  It somehow didn’t matter I had only landed one fish in 11 hours.  The lemons the fish had served up for me, had magically become lemonade.

2 thoughts on “SKUNKED!! When The Fish Give You Lemons…Make Lemonade”