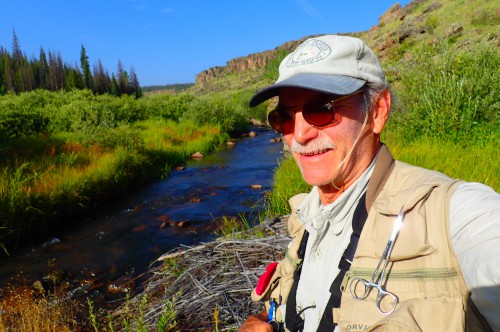 What a treat to discover a new water in a scenic canyon…with some big trout to boot. Last week I drove over the Continental Divide towards Gunnison and then headed southwest into the vast undeveloped Cochetopa Hills and the high country of the La Garita Wilderness Area.  Several of my favorite trout streams that rush down 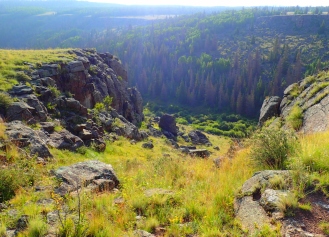 from the rugged peaks along the Divide—like Cochetopa and Saguache Creeks– were finally down and in fishable shape after a very wet summer.  But this new water was also on my radar.  I had read about Pauline Creek  in the fine guidebook, 49 Trout Streams of Southern Colorado, that the authors Mark Williams and Chad McPhail had stumbled on and raved about:   “…rest assured, once a dry fly or beadhead breaks the surface, so will a trout.”  When I drove over the creek on my way to fish in the wilderness area 10 miles up Forest Service Road 794, I was immediately skeptical.  At that point, Pauline hardly amounts to rivulet status, only a few feet across, although some beaver ponds upstream looked interesting.  That night, after a fabulous day casting to trout on Cochetopa Creek in the wilderness area,  I pulled out a topo map (National Geographic #139 La Garita/Cochetopa Hills) and found that a few miles below the road where Pauline was hardly a trickle, several streams added their waters.  That looked more promising, so early next morning around 7:30 a.m. I trundled down a 4wd track off FS 794 above where Pauline empties into Cochetopa Creek.  The jeep trail ended abruptly at a big cliff.  The good news as I peered over into the canyon was that the creek indeed had more water here, and the wide canyon floor was punctuated by several good-looking beaver ponds that were sure to hold some sizable trout.  The bad news:  My aging knees were already protesting at the thought of scampering down that precipitous incline—a good 200-foot drop—in my waders and wading boots and carrying a long fly rod.

As usual, trout fever prevailed, and a half-hour later I was at the bottom and hiking downstream towards a couple of likely pools just above where the creek plung 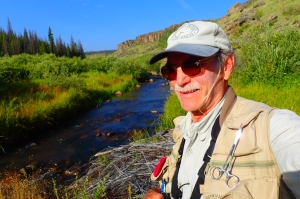 ed into a narrower, darker gorge.  The going was tougher than I expected.  The open “meadows” seen from above turned out to be deep waist deep grass with soft marshy footing and hidden holes.  The option was higher up on dry ground to do some rock hopping over big boulders.  Yes, the perils of Pauline.

I finally hit the water around 9:30 a.m., but my cheery mood soon darkened when the first two alluring pools yielded nothing…no bites and not even a glimpse of a small trout scurrying for cover.  There were no hatches, few bugs on the water, and I noticed some of the rocks had a distinct orangish tint….which out West is often a sign of heavy metal contamination from an old mine which is death to fish.

I was starting to think of where else I could fish that day as I lofted my Royal Coachman Trude/beadhead caddis dropper combination into the next pool at a big S-bend in the creek.  I was momentarily transfixed as I watched a huge trout rise slowly from the depths of the pool’s slightly milky waters and suck in the dry fly.  I set the hook, and the fight was on in close quarters.  The big critter bolted for the snags in the undercut bank, but fortunately I was using my trusty Sage 5# rod and horsed him away from trouble.  He then bolted downstream, reversed course, and flashed by me the other way.  After a good tussle, the fat 16- inch  cuttbow slid into my net—one of the largest small stream trout I have ever caught.  Cuttbows are a beautiful cross between rainbow and cutthroat trout.

beadhead caddis dropper.  Then as the stream leveled with more meanders, I started to pick up brownies, one going 13 inches, as well as several more 13- inch cuttbows.  The going was tough in places with thick willows snatching at my fly line and waders as I worked upstream.  The one technique tip I can offer is to make sure to fish out each drift, letting the fly glide by you and go downstream.  Several times a trout would zip out of a pool and streak five to ten feet downstream to nail the fly just before it bounced into a riffle.  Needless to say it was fun to watch the little beauties in hungry pursuit of a meal, but took a lot of patience not to set the hook too soon.

Around 12:30 p.m. I finally made it up to the big beaver pond where I spotted trout rising in the main slow current

and several side channels.  I fooled a 13-inch heavy brownie on the Royal Trude and several smaller ones on the caddis dropper, but a big one got the last laugh, snapping off the entire rig with a slashing strike on the dry.  After I caught and released another ½ dozen, I tried to bushwhack up above the pond where the creek narrowed  and straightened, managed to catch  a few fish, but finally waved the white flag—the thick willows and brush lining the stream persuading me it was time for lunch.  The sun held out till I was finished, and then I scurried back up the slope to beat the storm that was brewing over the Continental Divide above.  All-in-all it was a great day—two dozen plus fish, many 12 inches and over—and lots of free exercise to boot.

Oh, did I mention the wild raspberry patches with lots of tasty fruit I discovered while navigating the rocky slopes??  An unexpected pleasure of Pauline.

5 thoughts on “The Perils (And Pleasures) of Pauline…Creek, That Is—-Near Gunnison, CO”