CAVEAT: The North Fork Road has reopened, but is still very rough.  Call ArkAnglers in Salida, CO, for latest information.

For my articles about nearby Island and Hunky Dory Lakes see:

The North Fork of the South Arkansas River springs from three high-mountain lakes–Arthur,Island,and Billings– about 20 miles west of Salida,Colorado.  Arthur Lake is one of my favorite early summer destinations, ensconced in a gorgeous setting just below the Continental Divide, loaded with hefty cutthroat trout, and requiring some substantial effort to reach its shores.  Which means I usually have the place to myself, particularly during the week.  It’s late June, and the report from ArkAnglers fly shop is that Arthur is ice-free, so I’m on the road early for the hour-long drive west from Salida to the trailhead at North Fork Reservoir.  The turn off of US 50 is at Maysville, then about a ten-mile trek up County Road 240 that starts out as a smooth, scenic paved road but which turns gnarly about four miles up just past the public Shavano Campground.  From there it is a very rough road suitable only for high-clearance, four-wheel drive vehicles.   You’ll be lucky to average 10 mph.  Buckle up!  Some big cutthroat are just up the road!

When I arrive at North Fork Reservoir, there’s no one there.  Yippee!!  The attractive campground has been closed for several years due to problems with the toilets, so while you will see a few hearty campers occupying rustic sites on the drive up, you won’t have to contend with hordes of people up here as was true sometimes in the past.  I overcome the temptation to try some casts to the trout that are dimpling the glassy surface on the reservoir, pull on my hiking boots, hoist my day pack and start the hike across the dam

that leads to the trail to Arthur.  I know at the north end of the dam I will be doing a version of an angler’s high-wire act to cross the outlet stream.  There’s no

bridge, only a log wedged across the North Fork that demands some ability to balance as you navigate above the rushing water.  I advise strongly using a hiking pole to assist.  The option is to don some waders and cross the small, shallow stream, then saddle back up with your hiking boots.  But then you might get tempted again to throw a fly–I find the outlet loaded with dozens of spawning trout, some pushing 18 inches!  But I refuse to be distracted, and as the trout scatter, I tiptoe like a mountain goat across the log, and find the trail to Arthur along the North Fork Reservoir shoreline.  If you cross the creek feeding the reservoir on the south side, you’ve gone too far–the trail turns away from the lake and follows the east side of the creek uphill and south towards Arthur Lake.

The trail, about 1.2 miles one way with an elevation gain of 500 feet, is steep at first, but well-marked and not too difficult, although several trees have fallen across the path.  In

about one-half mile, the trail levels out and emerges into a big valley bisected by the creek that empties Arthur Lake. The key is to cross the creek and meadow as soon as you emerge from the canyon section and head up the incline to the lake.  If you cross further up, you will run into some very marshy terrain, and if you hike up the trail further and follow the north side of the creek, you will hit some very imposing palisades that are risky to climb.  As you ascend towards the lake, keep high above the outlet creek which will be on your left.  It’s about an hour trek to Arthur Lake from the trailhead, with several breaks to catch my wind.

Arthur Lake sits at almost 12,000 feet, high above the North Fork valley.  The first view of the water is always a stunning one, a perfect mountain lake idyll.  And better yet, I see some trout dimpling the slightly rippled surface.  As usual, I have brought both my fly rod and ultra-light spinning outfits.  There’s plenty of room to cast from the east shoreline, so I rig up the fly rod first.  Despite the temperature being only in the upper 50’s when I arrive, I also have to break out the 100% deet–the mosquitoes and flies are fierce, and I have forgotten my mosquito head net.  They are as bad today as anything I have experienced in Alaska or Minnesota.  But the sight of some big trout feeding, splatting the surface, make me forget the minor annoyance.

I head for the east shoreline where some shallow flats drop off quickly into deep water, and I have found the trout 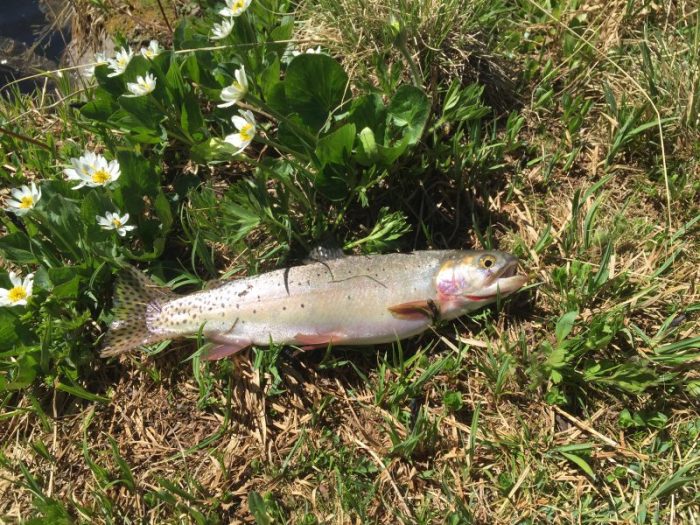 lying in wait on earlier trips.  I start out with a foam ant that has been productive in the past,

then a Griffith Gnat that has also fooled them on previous trips, then a zebra midge, followed by a zug bug and crystal bugger.  No dice!  These darn persnickety mountain trout.  I get lookers and swirls, but no hard hits.  In mild desperation, I break out my spin outfit and toss out a variety of spinners and marabou jigs into the deeper water.  Nada!  The trout keep rising along with my growing frustration.  Finally I get down on my knees to scoop up some of tiny bugs that are floating on the surface–the minute iridescent olive beetles catch my eye. Worth a try, and thankfully I have a small #18 fly in my box that’s a reasonable facsimile.  Immediately I hook a fatty 14″ cutthroat that shoots out of the depths right at the drop off to nail the beetle,  then another.  I congratulate myself on my piscatorial

perspicacity, but of course then the fish get shy, looking, swirling, chasing the beetle, but no firm hookups.

It’s time for lunch, and it’s warmed up to 70 degrees, so I break out my great little REI backpack chair and soak some rays….then chow down on a gourmet lunch of grilled Andouille sausage, Amish blue cheese, balsamic infused crackers, and a good Squirt soda, all topped off with an Almond Mountain Joy.  Lunch of champions.  I enjoy the fabulous view, scan the slopes with my binoculars for mountain sheep, and think how lucky I am to have this scene all to myself.

Finally the pesky mosquitoes and flies jolt me back into action.  I decide to make a clockwise circle around 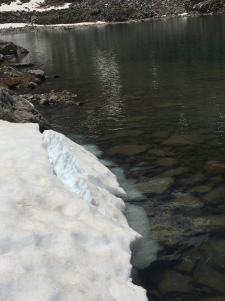 the lake, concentrating on a couple of mini-fjords on the south side that have produced some big fish in the past.  I get a few strikes, but see few cruising fish.  Finally I run into some icebergs calving off into the lake and some deep snow drifts that I carefully posthole through, hearing the water lapping up under them.  In the shallow water at the northwest corner of the lake, I spot some decent cutts cruising.  I get a couple of hits on the beetle, but no hookups, and then their interest quickly wanes, so I decide to go contrarian.  I tie on a #14 rubber-leg hopper pattern despite the fact that there aren’t any

grasshoppers within a country mile, and lay out a long cast along the deep north shoreline where some big trout are  congregating, probably getting ready to spawn.  I let the hopper settle and ripples disappear, then move it ever so slightly.  KERBLAMM!  A big cutt shoots up from the bottom and nails the fly, then rockets off into the depths.  He wanted that meaty meal!  I am lucky I have a stout #4 fly rod and 5X leader so I can turn the big guy.  The fight lasts a couple of minutes, and the cutt makes me wish I had a net as he continues to tussle in the shallows.  Finally he comes to the shore.  I remove the fly, take a quick picture of the 16-inch beauty, and let him return to his amorous adventures!

It’s getting late–4:30 p.m.–and I think I’d better be heading back down the mountain.  But I see a lot of surface activity back at the northeast corner of the lake.  I creep over and see dozens of trout picking something off the surface, some pushing 18 inches!  They show zero interest in the hopper, so I switch back to the beetle, which results in a couple of smaller trout.  But the big ones fin by my fly insouciantly numerous times.  I can’t figure out what they are feeding on, so as the sun begins to set behind the Continental Divide, I decide I’d better hightail it

back to the SUV and the hour-long bumpy drive down to civilization.  On the way down, I try to stay north of the creek, but still manage to come out in the wetlands above where I wanted to be.  Fortunately my hiking boots are waterproof!  I make it back down to the North Fork Reservoir in time to see another fly fisherman pulling out a couple of decent stocked rainbows from the water.  I think next time I will bring my float tube and give that lake a try–it receives much less pressure than when the campground was open and the far shores see even less.  Oh, and then there is still Island and Billings Lakes to sample up above.  Yes, the proverbial next time!  I’ll be back later in the summer.